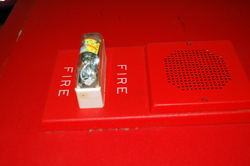 Photo: A faulty smoke detector caused an evacuation during 5A today.

Photo: A faulty smoke detector caused an evacuation during 5A today.

A third-floor fire alarm sounded today during 5A lunch, prompting students and faculty to evacuate the building until fire and rescue workers conducted a search of the school. Officials identified a defective smoke detector in the stairway off the 320s hallway as the cause of the false alarm, according to building service worker Mark Alfred.

Students and faculty waited for 15 - 20 minutes while fire and rescue workers investigated the incident, according to Alfred. After the building was cleared for reentry, the administration arranged for a fire technician to fix the faulty detector during seventh period. "We had maintenance come out and fix it," Alfred said.

Alfred was unsure why the fire alarm sounded, but he speculated that excess dust may have triggered the smoke detector.