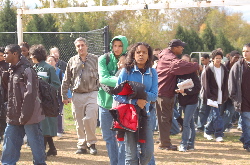 Photo: A fire alarm prompted an emergency evacuation at the end of 5B today.

Photo: A fire alarm prompted an emergency evacuation at the end of 5B today.

A faulty smoke detector at the end of the 140s hallway near the back exits went off today initiating a school evacuation. A fire drill initially scheduled for today during 3rd period was cancelled because of the cold weather, but the defective smoke detector caused an evacuation despite the cancellation.

According to Business Manager James Funk, Blair's smoke detectors contain extra-sensitive photo-cells that can be triggered by dust clouds stirred up by crowds of students and buffers, or movement that occurs near the ceiling. There is no way of knowing, according to Funk, what triggers a detector unless there's a fire. Building inspectors will periodically make sure that the detectors are in good condition. The local Fire Marshall has reset the school's sensors.

The evacuation went very well according to Funk who said that most students were out of the building within 10 minutes. The Marshall expressed his surprise at how quickly the school evacuated.