The FDA recently approved a pill that can track whether the patient has ingested the pill or not. It's called "Abilify MyCite," and aims to treat schizophrenia, and manic and mixed episodes associated with bipolar I. It can also be used as an add-on treatment for depression in adults.
Abilify MyCite has an Ingestible Event Marker (IEM), which is a tiny sensor embedded in the center of the pill and is about the size of a grain of sand. Once the pill is swallowed, stomach acid activates the sensor, sending an electrical signal to a wearable patch worn on the patient's chest.
The embedded sensor is a silicon chip with a logic circuit that has two pieces of metal, copper and magnesium. When the sensor is dropped into a polar solution (like HCl stomach acid), the device generates a small current that is powerful enough to be picked up by the sensor. The patch that the patient wears will send data, such as the time the pill was taken and the dosage, to a smartphone app via Bluetooth. This patch must be replaced every seven days. The patient and their doctor are the only ones with immediate access to this data, but the patient can also choose to give access to up to four other people, usually their family members. The patient can revoke access from any of these four people at any time. 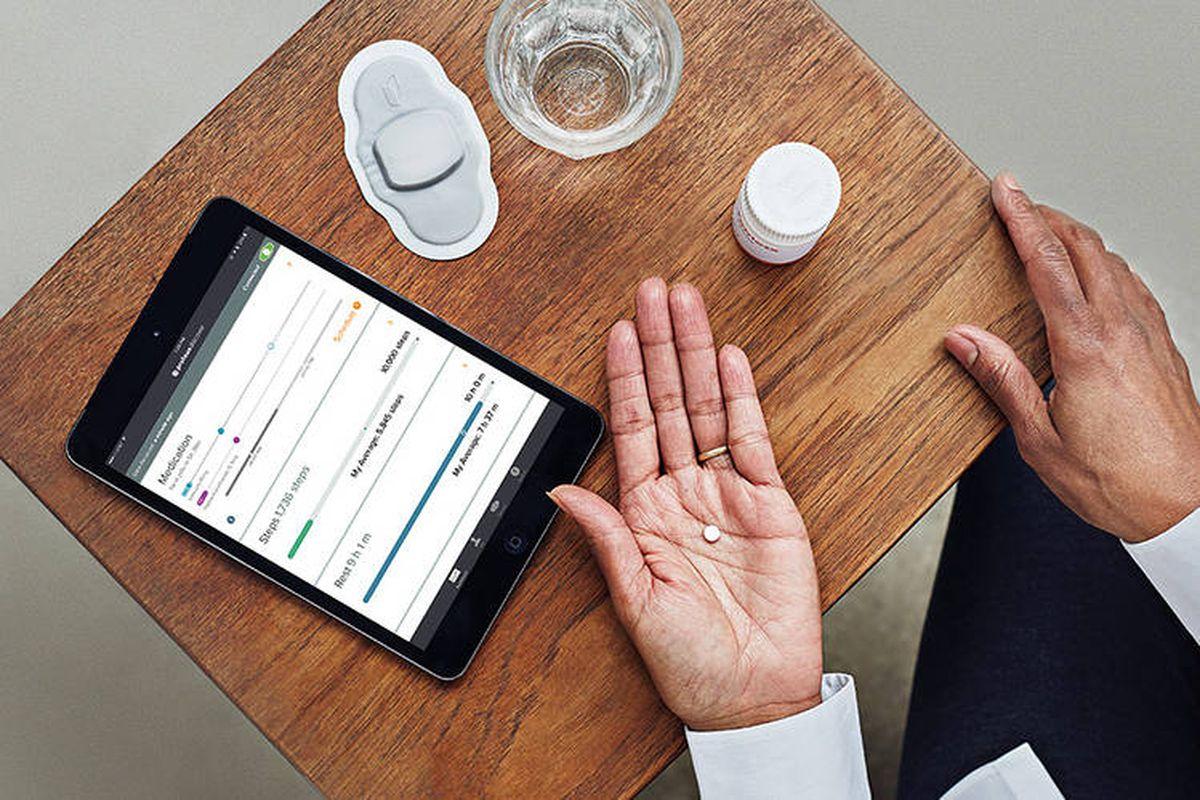 Photo:
The pill comes after years of research and is a venture between the Japanese pharmaceutical company Otsuka and the digital medicine service Proteus Digital Health, which makes the sensor aspect of the design. The pill is one way to address the prevalent problem of patients not taking their medication correctly. The IMS Institute estimated that the improper and unnecessary use of medicine cost the US healthcare sector over $200 billion in 2012. The approval also opens the door for digitizing pills that are used for other conditions beyond mental health.

Experts have expressed concerns over what the pill might mean for privacy. Some are worried that tracking pills will be a step towards punishing patients who don't comply. Ameet Sarpatwari, an instructor in medicine at Harvard Medical School is one person who has raised concerned about the ramifications of releasing a digital pill. "[It] has the potential to improve public health. [But] if used improperly, it could foster more mistrust instead of trust," said Sarpatwari in a New York Times interview.

The Wall Street Journal reports that the FDA is anticipating a potential raft of approval requests for other digital pills. A spokesperson told the publication that the FDA is planning to hire more staff with "deep understanding" of software development about medical devices, and engage with entrepreneurs on new guidelines.
Otsuka hasn't indicated how much the digitized Abilify pills will cost yet. The Wall Street Journal reports that the company plans to work with some insurers in covering the digitized pills with production planned to be ramped up only if it can find willing insurers.
Although Abilify MyCite raises some privacy questions, it has tremendous applications. The sensor in Abilify MyCite can be implanted in other medications, specifically opiods, to ensure that patients are not overdosing on pills, potentially saving thousands of lives. It can also be put in contraceptive medication, a medication that has to be taken everyday at a specific time, to help remind forgetful users to take their medication.