From administrating standardized test to preparing students for college, the College Board is recognized for its firm commitment to furthering the education system in the United States. Last week, the College Board finally acknowledged what many educators fail to: many of the 1.2 million kids who drop out of school each year have no other choice. With high unemployment rates and daunting college tuitions, many American families depend on their teenage children to get jobs immediately, forcing them to abandon the pursuit of their education. These students should not and cannot be held entirely accountable for the high dropout rates. Instead, drastic changes in the education system must be made. Plans for education reform have appeared before, but College Board is finally taking the bold steps necessary to fight the main reason why American education is falling apart: it lacks major attention. 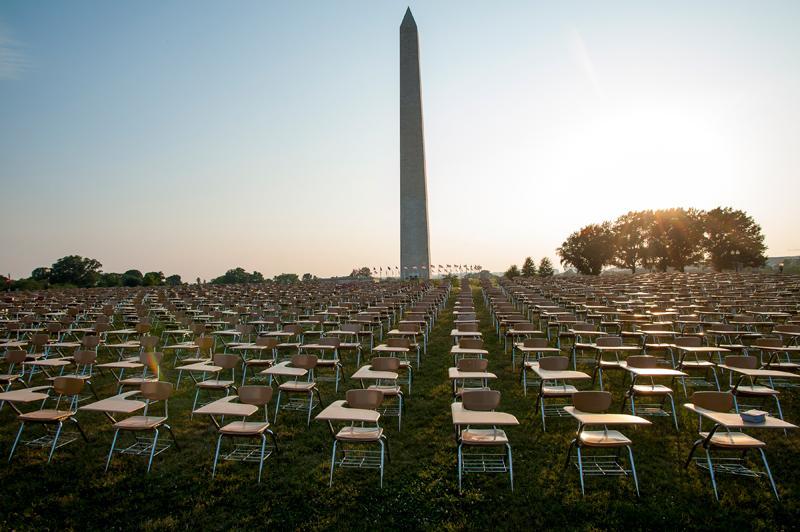 Photo: The College Board lined up 857 desks at the National Mall to persuade politicians to address education reform.

Photo: The College Board lined up 857 desks at the National Mall to persuade politicians to address education reform.

On June 20, the College Board launched the "Don't Forget Ed" nationwide campaign in hopes to inspire the two 2012 presidential candidates and other future lawmakers to address education reform. As part of the movement, 857 wooden desks have been lined up in long rows at the National Mall. The number 857 is intended to shock legislators, as it represents the average number of students who drop out of school every hour of every school day. The College Board also purposely chose to have the display in Washington D.C., so that it will be at the heart of the decision making center of the U.S. College Board has taken a unique approach to this campaign, making it different from most other education campaigns in the past. Instead of targeting high school students, who are the subject of the campaign, the campaign targets politicians who can increase funding towards education. The display of desks grabs the attention of policymakers, making the campaign the College Board's first monumental political stand.

Since election time is just around the corner, the efforts of College Board in "Don't Forget Ed" are especially crucial in order for our leaders to turn their attention towards education. The goal of the campaign is to have education reform come up in debate and legislation. College Board President Gaston Caperton recognizes the importance of bringing education into the political conversation. In an interview with The Teacher's Lounge, Capteron said, "'Don't Forget Ed' recognizes that education is the foundation of our society. Yet every four years, the issue of education is shockingly underplayed on the campaign trail."

This year, both presidential hopefuls have already expressed some concern for the nation's education system. According to the Associated Press, President Barack Obama said at a speech he made at the Cuyahoga Community College Metro Campus, "Now's the time to move forward and make sure we have the best-educated, best-trained workers in the world." Similarly, GOP Nominee Mitt Romney said the United States is in "a national education emergency" during a speech to the Latino Coalition last month. Despite the candidates' concerns, however, not enough is being done to improve the education system.

In fact, the Hart Research Associates and North Star Opinion Research surveyed nine key swing states and found that although education plays an important role, it is rarely the deciding issue. This indifference is probably due to the fact that candidates do not voice enough about their plans to reform education and presidential debates rarely revolve solely around education reform. Furthermore, according to social change organization dosomething.org, many educators lament how the United States, which once had the highest graduation rate in the world, has now dropped down to the 19th highest.