The U.S. women's soccer team may have lost Sunday in the final match of the 2013 Women's World Cup, but they won another important victory. More than six years after Mia Hamm - the best women's soccer player to date and arguably one of the best American footballers of either gender - retired, it seems that Women's soccer is finally making a comeback. As fan favorites like the National Basketball Association and National Football League move towards lockouts, another sport is going to need to fill the void. That's where women's soccer comes in. 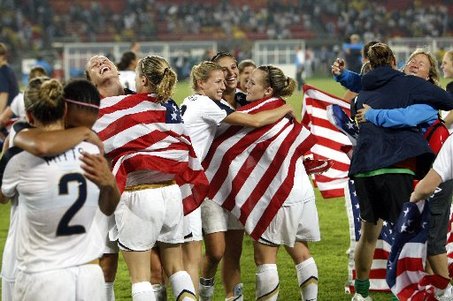 Photo: The U.S. Women's Soccer Team made it to the 2011 World Cup Finals.  Photo courtesy of YAKapparel.

Sunday's loss to Japan in penalty kicks marks the third time the U.S. Women's team has made it to the World Cup Finals since the first Cup in 1991. The U.S. has won the Women's World Cup twice. In the 2015 championship, hosted in Canada, 24 teams will be in the running, eight more than this year's Cup. Countries that would never have a chance to qualify for the Men's World Cup, such as Equatorial Guinea, have the opportunity to succeed in the less competitive Women's Cup. In historically strong soccer countries like Brazil, the women are finally getting a chance to prove themselves.

The Japan-U.S. game was the highest rated soccer game on cable television in the history of cable. Perhaps this is a sign that the next women's world cup won't be on cable, and will instead be broadcasted on FOX or ABC; it might even make it on Telemundo, which broadcasted the men's games. Maybe viewers were drawn because of the good looks of Hope Solo and Alex Morgan, or maybe to view Japan's strength after the earthquake, but whatever it was, ratings scored big time. Views mean money, money means prominence and prominence means recognition. Soon enough they'll be whacking it like Wambach instead of bending it like Beckham.

In the early 2000s, when Mia Hamm was in her prime and women's soccer in the U.S. was still running on a high after the 1999 World Cup victory, you couldn't find a DC-based Washington Freedom women's team game that wasn't packed. But since the relocation of the Freedom - from DC to Gaithersburg - and women's soccer's split into two smaller, less competitive leagues, women's soccer has been flying under the radar. Then again, it seems like all American soccer is lying low, not attracting attention internationally or even by soccer fans at home.

For a country where almost all little kids play soccer at one point or another, the success of American soccer at an international level is surprisingly dismal. The men's league, Major League Soccer, is somewhat of a flop, despite bringing in foreign talent, and true soccer fans usually turn to European leagues for entertainment, such as La Liga in Spain, or the English Premier League. The US women have a chance to change this.

The key to increasing viewers will be in the ability of women's soccer to stay prominent, even as the World Cup fades into the distance. With the 2012 Olympics just around the corner, where the US will likely be a contingent for various medals, it's up to women's soccer to stay fresh in American minds for the year in between. Expo games between teams from other nations, as well as combining the two less competitive leagues, to form a league more like the one from last decade will be key to the success of the sport. Women's soccer has captured the hearts of the people; all they need to do is keep them.