Festival of lights brightens up the fairgrounds

Freshman Ruhi Vasavada stands in a small tent crowded by performers, dressed in a long skirt decorated with mirrors, a matching blouse and a sash draped over her head. This performance signifies her fourth year performing for Diwali Mela, a fair to celebrate the Diwali festival. And in front of her are hundreds of people, waiting eagerly for the many festivities to come. 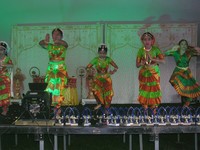 Photo:
Diwali, the Indian Festival of Lights, is one of the major annual festivals celebrated by Hindus, Jains and Sikhs all around the world. Even though the actual day of Diwali is Oct. 21 this year, Sept. 30 marked the 12th year anniversary of the Mela, organized by the Association of United Hindu and Jain Temples. Each year, hundreds of people from around the D.C. metropolitan area come to the mela to enjoy performances, shop, eat food and have a fun time celebrating their culture.

When Vasavada looks around, she sees mostly Indian faces at the mela. But even within the Indian culture arises great diversity as people from different parts of India offer their own explanations to the origin of the festival.

In North India, Diwali celebrates the return of the Hindu God Rama with his wife and brother after the defeat of the demon Ravana during Rama's 14-year exile in the forest. For Southern Indians, Diwali signifies the defeat of the demon Narakasura in the hands of Lord Sri Krishna. Narakasura was said to have kidnapped and enslaved 16,000 princesses, who were then freed by Krishna.

Despite the diversity of beliefs, Diwali also showcases Indian unity as people from the entire subcontinent can come together to celebrate the universal message of Diwali — good overcoming evil. "This [mela] is one event that brings everyone here…[be it] North, South, East, West, Gujarati, Punjabi," says to Shyam Bajpai, co-chair of the Coordinator and Finance Committee for Diwali Mela.

Gathering for a good time

Every year, Vasavada looks forward to the Diwali mela not only because of her dance, but also because it's a chance for her to reunite with the many friends who flock to the popular event. 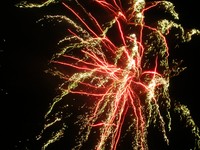 Photo: Fireworks at the Diwali Mela fair in Washington, D.C.

Photo: Fireworks at the Diwali Mela fair in Washington, D.C.

"It's a good place to see everybody," says sophomore Naina Soni. According to her, it is as if the whole Indian community is at the mela. But it is not just Indians who show up — Soni says people of different races are present too, who get to learn more about the Indian culture.

Even though hundres come each year to enjoy the cultural cuisine and shopping at the fair, some also enjoy celebrating Diwali in the intimacy of their home.

Turn on the lights

On Diwali, senior Monika Chadda finds herself in a house full of lit candles, which symbolize good conquering evil. "We'll light up candles and put them all over the house…and outside around the house," she says. Her family then gathers around in the living room to sing devotional songs, called "bhajans," and recite prayers. At the end, there are sweets for everyone to enjoy.

During Diwali, Poolesville junior Shelly Kapoor goes around and makes sure all the lights are on in her house. "There is no dark area in the house. Even [in] the bathroom we leave the lights on," she laughs. Her family also sets up the traditional "diyas," small earthen lamps often associated with the festival. Even Christmas lights go up for the occasion. Prayers and sweets are a part of Kapoor's celebration, too. 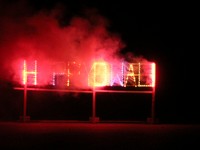 Photo: As the finale of the Diwali Mela, the "Happy Diwali" sign is lit.

Photo: As the finale of the Diwali Mela, the "Happy Diwali" sign is lit.

In addition to celebrating the festival at home, some people also go to the temple for Diwali. Quince Orchard's junior Ravi Patel, a volunteer at the mela through the Shree Swaminarayan Temple, plans on going to the temple on Oct. 21 for the occasion. "At the mandir [temple], we'll have a whole festival," he says, where people make food offerings to the Gods.

Vasavada already has candles set up outside and inside her house, which her family put up at the start of Navratri, the Indian festival of worship and dance. She plans to take them down on Diwali weekend. But right now, it is time for her to step up on stage as her song begins. Vasavada appears before the large audience with a smile on her face as she dances to the beat of a Gujarati folk dance. She hopes people will always remember that Diwali is the time "to 'brighten' up and enjoy ourselves."