Plans for improvement have not been made

Blair's football field conditions have not improved despite the partial resodding of the middle of the field in the fall of 2004, according to Dale Miller, Blair Athletics Director.

The middle of the football field is currently a compacted, dry area of dirt. It has to be re-grated and redone, according to Miller. The Montgomery County Park and Planning Commission (MCPPC) resodded the middle of the field last year, but the conditions have not improved. Miller believes that the conditions have gotten poorer since then. "That's the worst part of the field," Miller said. 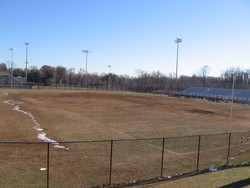 Photo: Blair's football field remains in poor condition, but resodding the field would cost about $50,000.

Photo: Blair's football field remains in poor condition, but resodding the field would cost about $50,000.

Ginny Moxley, Park Manager of the Wheaton Maintenance Facility of MCPPC, said the field is in such poor condition because Blair sports teams have overused it and played on it in inclement weather. Miller attributes the poor field conditions to the fact that it has not been cared for properly.

Miller argues that other schools' fields are played on just as much as Blair's, but their fields are in better condition. "There should be [at least] one person from MCPPC at Blair maintaining the field every day," Miller said.

MCPPC owns Blair's football field and is in charge of scheduling other sport leagues to use the field, mowing and lining the field for games, cleaning up after the games and taking care of the soil, according to Moxley.

The Washington Chiefs, part of the North American Football League, play eight games on Blair's field each summer. The Chiefs, in addition to the teams they play, are the only sport teams that MCPPC schedules to use Blair's field, according to Moxley. Other school teams that use the stadium field include the private boys' schools Gonzaga, located in D.C., and DeMatha, located in Hyattsville. These teams are given use of the field through Blair, and MCPPC is not informed of these negotiations. "At least if we knew who [else] was on there, we could say, 'Please don't ruin the fields,'" Moxley said.

Unlike Miller, Moxley believes that the field will get better by itself and, that although the field is not in the best condition, it does not need resodding. "[The grass] will be back in the spring," she said.

Members of MCPPC have met to discuss the problems with Blair's field, but each proposed solution would be more expensive than the County can afford, Miller said. It would cost more than $50,000 to resod the football field, according to Moxley.

Last year only one third of the field was resodded and that cost $6,895.20. The field repairs were funded through a Capital Improvements Program (CIP) Fund called Ballfield Initiatives, according to Brent Conner, Ballfield Coordinator of MCPPC. This fund allows MCPPC to perform major repairs and renovations throughout the county on both park and school fields, according to Conner.

Moxley maintains that MCPPC is in charge of paying for improvements of the field, but says she doesn't have the funding or enough staff to make major improvements to it.

Although Blair's Sport Booster Club raises money for Blair sports teams, the Club has not specifically raised money to improve the field.

Blair's sports department has discussed replacing the field with Astroturf to eliminate the problem of the dry compacted dirt. "It is a possibility," Moxley said, but she added that purchasing and installing the artificial grass would cost more than $1 million.