The Lady Blazers (5-4) returned from a two-game losing streak with a 7-0 victory against the Wheaton Knights (1-8). Blair dominated the play throughout the game. By halftime, the score was 6-0.

The game was an opportunity for the team to re-establish their scoring skills. After losing to rival Springbrook, the Blazers used this game to get back into an offensive mindset. "Coming off of a rough record, we needed this game to get motivated and get pumped for the next few games," head coach Brook Franceschini said. 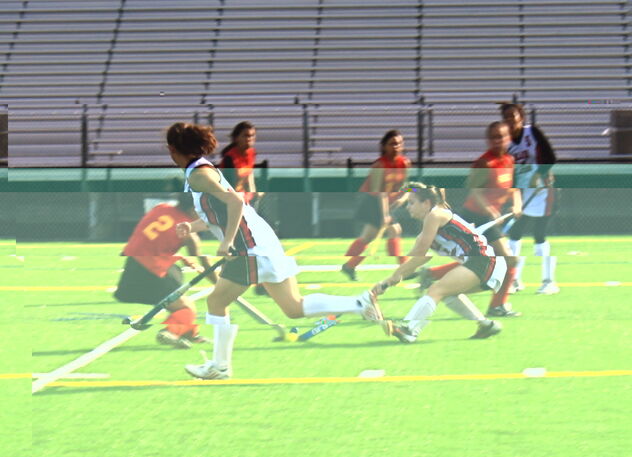 The Lady Blazers played most of the game on Wheaton's half of the field. The team focused on maintaining possession throughout the game, and was largely successful. When Wheaton offense broke away from Blair midfielders, the defense was able to recover the ball before it got close to the goal on multiple occasions.

The team had 22 shots on goal and yielded seven goals. Although the offense relaxed their scoring in the second half, the Knights didn't pose a threat to the defense. Goalie co-captain and senior Annie Buckley did not have to save any balls during the entire game.

With the score strongly in their favor by the second half, Blair used their comfortable lead to work on technique like passing, dodging and maintaining possession. "It was a good game for us to improve on skills we've been practicing," senior co-captain Nellie Garlow said. With their massive lead, the Blazers played "keep-away" and did not have to worry about scoring.

Garlow noticed an improvement in Blazer passing during the game, but admitted that the team's dodging skills could use improvement. According to Franceschini, these skills will be important in upcoming games against Wootton and Clarksburg, which are expected to present tough competition. "Next game we're going to really need to use the swinging door," Garlow said, referring to the use of the entire field, rather than just one side.

Garlow managed to hit three balls into the goal. "I'm happy to get out of a bad groove," Garlow said. "I always insert, but have never been able to score for the past four games."

Juniors Blake Morgan-Gamber and Janet Henkai, previous defenders, moved up to new midfield positions for the game. Coach Franceschini made this change to build a stronger offensive front.

Wheaton head coach Kim Polischeck said that the Knights's small size and inexperience contributed to their loss. She explained that several senior athletes left the team after graduating last year, and the remaining team has only one senior. The Knights played the entire game with only one substitute. Despite the loss, Polischeck said that the fast pace of a game on a turf field was a positive experience for the team.

Field Hockey will play their next home game Tuesday, Oct. 20 against Clarksburg at 7:00 p.m.