Blair varsity field hockey (2-0) shut down the Northwood Gladiators (0-2) on Saturday winning 5-0. Throughout the game, the Blazers dominated the Gladiators both offensively and defensively with sharp stick work, strong passes, and tight defense.

The Blazers began the first half strong, right away they gained possession of the ball and kept it on the gladiators' side. In the fifth minute, junior midfielder Anna Hukill passed to junior attacker, Luisa McGarvey who slammed the ball into the goal. The Blazer offense continued to play aggressively, by dodging Northwood defenders with quick stick work and forceful passes. Although the Blazers missed two corner opportunities, it was made up for when junior attack, Anna Reachmack scored an unassisted goal after the ball ricocheted off the goalkeeper's pads to her stick for a rebound in the seventeenth minute. Shortly after, junior midfielder Maddie Boyer redirected a forceful pass from senior midfielder Liza Curcio to make the score 3-0. 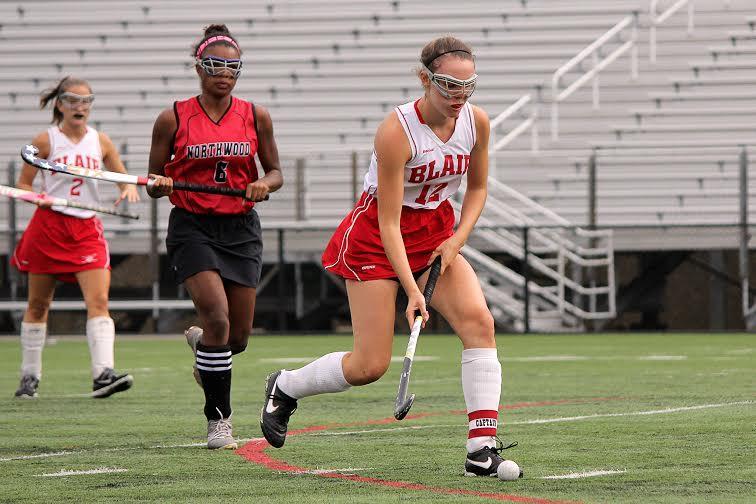 In the second half, the Gladiators began to pressure the Blazer defense with an 30 yard breakaway. However, junior defenders Emma Soler and Adina Rombro prevented the gladiators from gaining any more ground towards the goal while senior midfielder Erin Nolan tactfully passed the ball, keeping it within Blair possession. After Blair regained possession early on in the half, Boyer swept the ball, which was then deflected of a gladiator defenders stick and then slammed into the goal by Curcio.

The Gladiators continued to struggle with gaining possession of the ball as sophomore Kendall Price blocked any advances to the Blazers half of the field. In the thirteenth minute, the blazer's received a penalty corner were Curcio drove the ball to Boyer, who then passed to junior attack Nicole Spezio who slapped the ball into the goal, squeezing it past the reach of gladiator defenders. Throughout the rest of the half, Northwood battled, preventing Blair from scoring again, however the Blazers dominated overall.

The Blazers were content with their win. "We played well. We are very good at backing each other up and we have a strong offense," Nolan said. Despite their win, Nolan agrees there are aspects of their play that need to be improved. Nolan noted, "We need to work more on defense to midfield transitions and passing near the sidelines." The Blazers have started the season with finesse and are hoping to continue their winning ways throughout the season.