Losing a game is almost never fun. But after today's 0-3 loss against the Quince Orchard Cougars, the Blair field hockey team was in the best mood they've been all season. The Blazers (0-5), coming off last week's frustrating loss to Seneca Valley and a weekend with no practice, played their "best game in three years" according to one spectator. 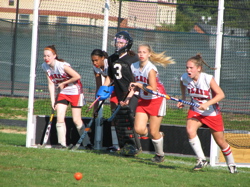 The Blazers played with more aggression and confidence than ever before and made the undefeated Cougars work for every shot on goal.

As has been the case in many of Blair's games this year, they were put on the defensive early in the first half. Quince Orchard's crisp passes and excellent communication allowed them to keep the ball behind the Blair 25 yard line for much of the first half.

However, the Blair defenders marked up well and prevented Quince Orchard from dominating the game. Juniors Claire Onley and Helen Anderson made strong clears and senior goalkeeper Maura Druhan was "a beast in the cage" with 39 saves, according to coach Brook Franceschini.

Despite this impressive defensive effort, the team couldn't stop everything. The Cougars scored 10 minutes in to the game on a weak shot that barely made it past the goal line. The Blazers kept up their solid play but Quince Orchard got through again several minutes later after a cross to an open attacker. 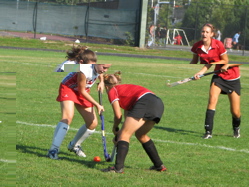 Photo:
Undaunted by the score, the Blazers stepped up their efforts and were able to bring the game up past the center line. For the first time this year, the Blair offense, led by sophomore Julia Stratton and senior Jessie Hallberlin, pushed the ball deep into enemy territory and kept it there. The teams played back and forth for the remainder of the half, but neither was able to take the advantage.

Blair got off to a bad start in the second half when a Quince Orchard attacker scored after recovering a shot blocked by Druhan. The Blazers refused to be discouraged though and kept up their strong play on both offense and defense. Druhan and Onley continued to break up the Cougars' plays and disrupt their momentum while Hallberlin and junior Eve Kenney were instrumental in transitioning the ball up-field.

In the last minutes of play the Cougars had several close shots on goal. They were all stopped and the game finished with the score of 0-3.

After the game, the team, coaching staff and spectators were festive despite the score. Holding Quince Orchard, who last year defeated the Blazers 0-13, to only a 3-point victory was an unexpected demonstration of how far the team has come since then. "In comparison to last year, this game is basically a win," said graduated former captain Emily-Kate Hannapel.

Franceschini was also proud of the team and how much of an improvement they have made this year. "They put all the fundamentals back in field hockey," she said. "They've just raised the bar."

The team's next game is this Wednesday against Northwood at 3:30 p.m.