JD Salinger was a man who understood the angst-filled, awkward years of young adulthood better than anyone. His famous best seller "The Catcher in the Rye" revolutionized literature. Although "Catcher" was criticized initially, reading the novel has now become a vital rite of passage into adulthood. Themes of the loss of innocence and the pains of growing up speak to young men and women, helping struggling teens come to terms with bitter realities that do not line up with the fairy tales they were fed from birth. 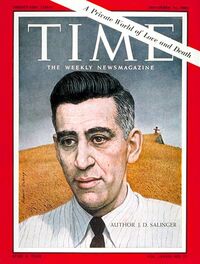 Photo:
Since his birth in 1919, Salinger was a strange yet brilliant character. He joined the army during World War II, which deeply affected his emotional state. His innocence was robbed after seeing the horrors of war, during which he also had to be hospitalized for combat stress reaction.

Despite how mentally troubled Salinger was, he blossomed into a literary genius. In 1948, the New Yorker published his first short story "A Perfect Day for Bananafish." Like "Catcher," this short story sheds light onto the vices of shallowness and selfishness.

Salinger's success kept building after this publication. The man who strived for attention as a youth finally received it through writing. Ironically, attention brought Salinger's downfall. A copy of "Catcher" was found in the pockets of Mark David Chapman, who shot John Lennon, and John Hinckley Jr., who attempted to assassinate Ronald Reagan. Further controversy that rose from the publication of "Catcher " drove Salinger into seclusion. He published few works after such publicity and retreated from the public eye.

Against his wishes, Salinger has become extremely famous, especially for his idiosyncratic writing style. He is able to capture the essence of human dialogue onto paper better than most authors. He had an incredible eye for sharp social observations. Although many of his stories do not have much of a plot, they focus on telling complex scenes of human interactions.

Salinger's stories emphasize how much silence tells. This principle can be applied to his silent character. Here is a man who vehemently rejected the corrupt adult world. At the same time, he could not stop his own aging, ironically growing older than most people and dying at age 91. Never again making public appearances, Salinger only allowed one last lover into his aging world after age 53: Joyce Maynard, an 18-year-old. Salinger wanted to take on the role Holden Caulfield and Seymour Glass took on - protector of innocence. He saw child naiveté as something precious that should be cherished and maintained at all costs.

In the end, Salinger's death is bittersweet. Never comfortable in this world, he is finally tranquil in his death. We may now learn new insights into Salinger's life since he left instructions for the publications of his secretive manuscripts. Also there is talk of a "Catcher in the Rye" movie, now that rights have been released. Perhaps it is through death where we will truly get a glimpse into this complex yet brilliant author.