Finding the best way to stay warm during the winter

As the temperature drops in the D.C. area and snow begins to fall, many teenagers are looking for the best but still fashionable way to keep warm. And as warmth gets higher on the necessity list for many Blazers, The North Face outerwear craze has risen in prominence right along with it.

This clothing line has become very popular in the D.C.-Metropolitan area. Some Blazers have even paid up to $350 for a coat or $70 for a backpack. To enhance their look, Blazers also buy hats, gloves, shirts and sweaters.

The North Face was originally a store founded in 1966 by two hiking fanatics from San Francisco. When it first opened, only climbing and backpacking gear was sold, but as The North Face became more popular and more respected for the quality of its products, mountaineering and ski-wear apparel, equipment and sportswear were added to the clothing sold by the store. 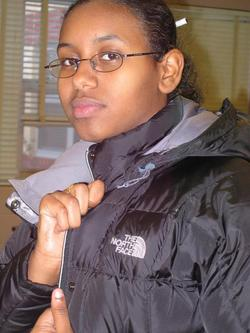 Although the store opened nearly 40 years ago, the brand did not become popular with teenagers until about two years ago; a rapper wore a coat from the company in a popular movie, which prompted many to look into the brand, according to Eddie Nzala, manager at Last Stop in Wheaton Mall, a popular The North Face retailer. Nzala says that The North Face sales have tripled from last year. "We got some [The North Face coats] in August this year, and they sold out in a month," says Nzala, who himself also owns a coat made by the company.

Last Stop was the store of choice for senior Victor Clark when he bought all three of his The North Face coats. He bought his The North Face sweater, gloves and backpack from another popular The North Face retailer, Up Against The Wall. Clark's The North Face clothing has a total value of $1,145, which has been used to purchase three different coats to make sure he is always coordinated. "A blue coat won't go with red shoes," says Clark.

To fund his expenses, Clark saves up money from his family. He says that teenagers are such faithful customers of The North Face because of its high profile and high quality of products. "Name brand is a big thing with teens nowadays," says Clark. He believes that the name is associated with the more luxurious pleasures in life. "North Face to other brands is like first class to coach," says Clark. 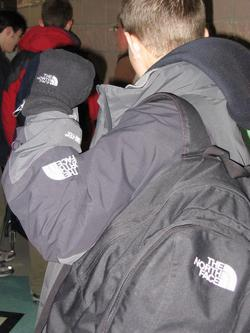 Photo: Junior Ben Hamburger sports his gloves backpack and coat, all products of The North Face.

Photo: Junior Ben Hamburger sports his gloves backpack and coat, all products of The North Face.

Senior Henry Soza owns two coats, a jacket, four fleeces, a backpack and a hat for a total value of $830 in The North Face clothing. Soza says he is willing to pay the high prices for The North Face outerwear and accessories because the company has a standing reputation and has a variety of clothing options. "I'm paying for the name," says Soza, who has been a fan of the brand since sophomore year.

Not all teenagers buy The North Face gear for the look. Junior Yohannes Haile says he bought The North Face coat, hat and gloves to protect himself against harsh winter weather. "It's not about being cool. It's about being warm," says Haile.

The North Face has aroused so much popularity that teenagers are even willing to steal them. Nzala says that Wheaton Mall is "infamous" for attempts at coat theft by teenagers. He adds that while no one has succeeded in taking a coat, there has been damage to merchandise such as holes left in coats after attempts to rip off security tags. 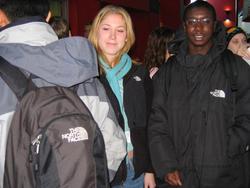 The North Face coats and backpack

Photo: Left to right, juniors Sophie Esparza and Mac Kpadeh wear The North Face jackets as they walk down the Blair hallway.

Photo: Left to right, juniors Sophie Esparza and Mac Kpadeh wear The North Face jackets as they walk down the Blair hallway.

Junior Ceo Kimba believes people who buy The North Face coats should be aware of the value of their clothing and the risk of having a coat stolen. He believes that when people buy products from The North Face, they should know there is a chance of it getting stolen. Kimba adds that customers should be able to guard themselves against robbers.

According to junior Ashleigh Nixon-Joseph, there is even a gang in Largo, Maryland, that steals The North Face products. "They throw Clorox in people's eyes so you can't see who stole your North Face," says Joseph.

With winter at its peak, Blazers sport The North Face emblem on their coats, matching backpacks, hats and gloves everyday. Some Blazers purchase The North Face outerwear to keep warm; others buy the clothing to keep up with trends in fashion, and some teens feel that ownership of The North Face gear is so important that they are willing to steal to have one.