Sixteen-year-old junior Kadiatu Kamara wears a white-gold band on the ring finger of her left hand as a constant reminder - since last year, she has been a married woman.

For Kamara, however, the wedding was less than memorable. She wasn't present at the ceremony, and she can't recall the month of her wedding without consulting a calendar. 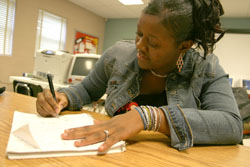 Photo: Junior Kadiatu Kamara does homework during 5B lunch. The wedding band on her left hand is a constant reminder that she is married to a man she has never met. Photo courtesy of Adam Schuyler.

Kamara's detachment is partially due to the fact that another party was far more involved in her wedding than she was: her parents. Although a 2002 article in Psychology Today estimates that 60 percent of the world's marriages are arranged, most take place in countries outside of America. Yet in American society, where romance rules and most brides spend months agonizing over the details of their weddings, Kamara and a handful of other Blazers instead grew up knowing that their parents would someday choose their spouses.

When Kamara moved to America from Sierra Leone six years ago to live with an aunt and pursue an education, she thought that she had left more than just family behind. Kamara imagined that "being American" meant her parents would excuse her from the traditions of her homeland - among them, the arranged marriages she had watched so many of her cousins go through. "I thought I could convince my parents that I'm not ready," she says. "I thought it would be different because I'm all the way over here."

Several months ago, however, Kamara was surprised by a telephone call from her father in Sierra Leone. He had found Kamara a prospective husband, he explained. He gave her a month to adjust to the idea, and last December, Kamara's parents in Sierra Leone married her by tribal tradition to a 23-year-old man she knew only from photographs and phone calls. Although Kamara was thousands of miles away, she felt bound by the traditions of her country to consent to the union.

Kamara's situation is not typical of American high schoolers planning on arranged unions, the majority of whom are not yet married, according to a 2002 article in the Chicago Tribune.

For senior Mariam Khan, the process will begin with a proposal - not from her suitor, but from his family. If her parents approve of him, Mariam will be given the opportunity to meet her suitor, and the engagement will not continue without her consent.

Mariam's father says that finding potential spouses for his daughter will be an extended process, but he won't begin his search until after Mariam has graduated from college.

"On the other side"

The prospect of marriage has always loomed in Mariam's distant future, but she hasn't given it too much thought in the present. Still, the knowledge that her marriage will eventually be arranged has helped Mariam concentrate her attention on more immediate aspects of her life. "It's changed how I run my social life," she says. "I'm not into the relationship bandwagon, so it's focused my energy on my studies."

Kamara, too, has seen a change in her social life since her father informed her of the match. "I have to be more careful and more responsible; I'm on the other side now," she says. "Even though I do have my social life, I feel like it's limited. I can't really talk to guys anymore, because I feel like that's not right."

However, Mariam doesn't see the prospect of an arranged marriage as an ordeal. "It's kind of a relief," she explains. "I don't have to worry about finding the right guy now. Eventually, when the time comes, I will be able to find someone with the help of my parents."

Kamara says that she understands why her parents decided to arrange her marriage. "They think that they know better than their kids," she explains. "My parents don't want their daughter to marry someone who will mistreat her, and they think that they can choose the right guy for me." In Kamara's family, "the right guy" first and foremost must abide by her religion, Islam.

A Muslim from the South Asian country of Bangladesh, Mariam says that her decision to have an arranged marriage is also closely tied to both religion and culture. Faizul Khan, a Muslim priest at the Islamic Center in Washington, D.C., says that this is a common theme among arranged marriages, which he sees mostly among Muslims from South Asian countries like Pakistan, India and Bangladesh.

According to William Stuart, an anthropology professor at the University of Maryland, arranged marriages continue to prevail in these cultures primarily because of a sense of family obligation. "Marriage is a contract, not just between the husband and wife, but also between the husband's and wife's sides," Stuart says. "In societies that believe in arranged marriages, they're often viewed as a union between families, not just individuals."

In February 2003, Mariam was reminded of that fact when her parents arranged the marriage of a distant cousin. Although the American-born bride chose to return to Bangladesh for the wedding - something Mariam has no intention of doing - experiences like these have always been a part of Mariam's life. "It's been in the back of my mind that this is what's going to happen later on," she says.

Kamara, however, is still adjusting to the idea of being married to a man she hasn't met. "I think I'm getting over [the shock]," she explains. Kamara will return to Sierra Leone this coming summer to get acquainted with her new husband, but she has no plans of moving in with him immediately.

Although she has reservations, Kamara knows that she has no choice but to accept the marriage. "Sometimes I'm scared, sometimes I don't want to do it, but I just have to get over it," she says. "It wasn't like my parents just went out and picked someone. They got to know the important things about him through his family first."

Senior Shuva Begum says that her reservations may be enough to keep her from consenting to an arranged marriage. "I really don't want to have one," she says. Still, Begum explains that arranged marriages have always been a part of her family: She has two older sisters who have already had arranged marriages, one at age 18 and the other at 21.

Both had a choice of suitors deemed appropriate by Begum's father, and although neither knew their intended for more than a few months before they got married, Begum says that there was plenty of time for her sisters to fall in love after the weddings. "One has been married for four years, one for three, and they're both so happy now," she says.