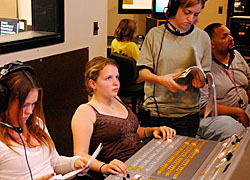 Photo: Broadcast students prepare to air Shades of Life during a practice run through. The show was the first live show broadcast in 10 years.

Photo: Broadcast students prepare to air Shades of Life during a practice run through. The show was the first live show broadcast in 10 years.

For the past ten years BNC has taped its broadcasts and sent them to MCPS Instructional Television (ITV), which then approved and aired the shows in a rotation with other instructional programming and material, according to BNC adviser Shay Taylor.

Wednesday marked the first live broadcast since the 1996-1997 season, when a controversial episode of past BNC talk show "Shades of Grey" was censored because the episode's discussion topic centered around gay marriage. "Shades of Life," a new show this season, will open with an episode on teenage homosexuality in what Taylor called "a funny irony."

The censored 1996 episode marked a change in MCPS policy governing student-produced live television. After the episode was censored, a committee formed to address the issue concluded that schools alone are responsible for the content of their live broadcasts, setting a precedent that makes "Shades of Life," as well as future BNC broadcasts, possible.

Taylor and ITV supervisor Dick Lipsky agreed that a major advantage of live television is that it offers students more first-hand experience. According to Taylor, sending broadcasts straight to the air makes the difference between producing a video and producing real television.

Students can now tell guests when their show will air. "There's no 'Thanks for being on our show. Please stay tuned in the next month and a half," Taylor said.

"Face the Music"
Directed by junior Lizzie Horne. Starring sophomores Allie Berger and Andy Scott and juniors Eric Merchant and Sarah Rothman. "Face the Music" follows two professionals, Brittany (Berger) and Justin (Merchant) who are set up on a date. Over the course of the season, Brittany educates Justin on the world of music.

"Shades of Life"
Directed by senior Karla Berberich. Hosted by junior Molly Martinez. Martinez will lead a new talk show profiling teens and the issues they face. "It centers around the concept of hearing different perspectives and stories," said Berberich. "Hopefully students will be able to identify and learn from the issues we talk about." The first episode aired live yesterday on MCPS cable.