Blair held its first outdoor whole-school pep rally in three years today in the stadium to celebrate spring sports teams. The rally concluded with a powderpuff football game, the first one in years. 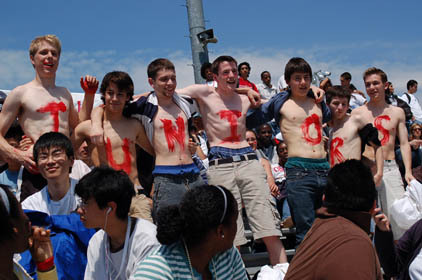 Photo: A group of Junior boys take in the sun and support Blair at Friday's pep rally.

Photo: A group of Junior boys take in the sun and support Blair at Friday's pep rally.

The event began when a white stretch limo drove across the field. The rally's emerged and then danced to Michael Jackson's "Thriller."

After pumping up the crowd and encouraging everyone to show their school spirit, the emcees did a quick shout-out to the winter sports teams, since the winter sports pep rally had been canceled due to February's ice storm.

Each spring sports team was then invited to come to the field to perform a skit or talk about their team, beginning with the gymnastics team, who performed a series of flips, leaps and splits across the field.

The boys' tennis team then brought "Sexy Back" with a cross-dressing and shirt slinging line-up to Justin Timberlake's song.

In a parody of the film "300," the boys' lacrosse team marched onto the field wielding their lacrosse sticks to defend against the monster of the "Persian" forces.

Next up was the co-ed volleyball team, who came out to the song "This is Why I'm Hot" by Mims. The boys' volleyball team joined them shortly afterwards, climbing out of two cars that they danced on and around. After senior Tim He ripped off his pants, proclaiming "this is why I'm hot," the teams drove out, piled on the tops of the cars.