A profile of the young photographer

After weeks of discussion, the first Silver Chips Online photo contest winner has been selected. She is junior Katie Frank who got the inspiration for her untitled winning photo on one of her regular photo class assignments. "Our assignment was 'spinning,'" Frank explains. "I had an idea of clothes in a dryer, but I decided, 'This is boring.' So I asked my brother to get in the dryer." The result is SCO's first official photo contest winner. 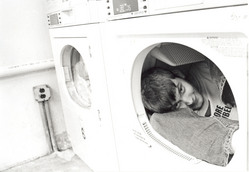 Photo: Frank's untitled photo was inspired by her assignment, "Spinning."

Photo: Frank's untitled photo was inspired by her assignment, "Spinning."

Frank was excited about winning the contest. "It allows students to portray their art and get feedback," she says. "Kids can get a taste to what it's really like as an artist." Other photographers who competed in the contest included junior Leslie Hong, who is a runner-up.

Frank started taking pictures after visiting a photography camp her freshman year, where she began nurturing her budding passion for photography. "I always liked photographs," comments Frank, who explains that she draws her inspiration from beauty found in uncommon places. "You can capture moments on film. You can make something beautiful that you wouldn't have noticed otherwise."

Frank publishes her works in other smaller exhibitions such as the Blair Art Show, and wherever she goes, Frank is motivated to appeal to her audiences' feelings. "I like pictures that inspire emotions in viewers," she says, "even if they are ordinary scenes with people or normal places."

Her role models are her photography teacher Frank Stallings and her uncle. "Stallings is really inspiring," Frank says. "He's so passionate about photography, and whenever he critiques our photos it really makes me want to persevere [as an artist]." "Plus," Frank adds, "he's also really funny." Frank's uncle also has shaped Frank to be the photographer she is today. He gave Frank her first camera and often offers her photographic advice. "He's taken a lot of great photos; they have a lot of character," she says.

When she is not taking photos or laboring long hours in the photo room, Frank practices in her band Aeris, a group of young Blazers who have played together for more than three years. Frank plays the tambourine, triangle and keyboard.