The shortened winter Spirit Week ended with an SGA-organized pep rally in the gymnasium on Feb. 17. It was the first winter pep rally in two years. 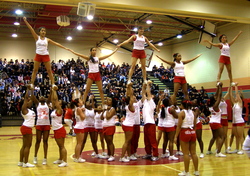 Photo: The Blair Cheerleaders were the opening performance at the winter sports pep rally on Feb. 17.

Photo: The Blair Cheerleaders were the opening performance at the winter sports pep rally on Feb. 17.

Emcees sophomore Molly Martinez and junior Terence McPherson hosted the event, which was held during 7th period and included performances by Blair's cheerleaders and Pom Squad and skits by Blair's winter sports teams.

The cheerleaders, who ushered in the students, opened the pep rally. The girls performed a routine with jumps and aerial acrobatics to a music mix while Coach Sarah McLean did flips, splits and rolls in the air.

After the cheerleaders finished their routine, the swim team, clad in beach attire, swarmed onto the floor for the first winter sports skit. After announcing the boys' undefeated record, captain senior Tyler Wilchek stripped off his team jacket and pants to reveal his red Speedo, while several other members of the team followed suit. Afterwards, Wilchek and teammates launched class t-shirts and other articles of clothing into the bleachers with makeshift slingshots. 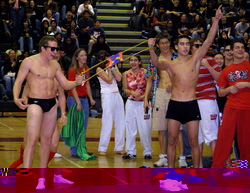 Photo: The Swim and Dive team put on a memorable performance at the winter sports pep rally.

Photo: The Swim and Dive team put on a memorable performance at the winter sports pep rally.

These skits were followed by a mini-game between the boys' and girls' junior varsity basketball teams. After the game concluded, Martinez and McPherson called for two seniors from the bleachers to shoot free-throws for basketball tickets and introduced the Spirit Week Court, which included the winners from Spirit Week.

After the brief intermission from the skits, the indoor track team made its appearance. Following them was the wrestling team, whose ranks had been depleted because many of its members were competing in a tournament at the time. Finally, the Pom Squad, which recently won the second-place team award at the MCPS Pompon championship, ended the pep rally with their own performance filled with poms-shaking and splits.

SGA communications director junior Bao Nguyen, who had organized this pep rally and the homecoming rally earlier this year, was pleased overall with the results. "I think this has been one of the best years for pep rallies," she said. SGA president senior Barun Aryal said he was pleased with how organized and timely the event was. "We were right on time, and we are usually late," he said.

Martinez also expressed her satisfaction with the pep rally. "It was good and upbeat. People cooperated, and everything went smoothly," she said. "Nobody got hurt."

Swim team captain senior Anna Chiplis had mixed feelings about this year's rally. "I remember it being a lot better when I was a freshman, but I'm glad that we had a winter pep rally this year," she said.

Last year's winter pep rally was canceled because of a fight earlier that day.