On a seemingly ordinary Monday, a group of sophomores shuffle into their last period of the day and get ready to start class. While they're writing down the homework, however, the teacher walks to the back of the room to introduce herself to several teenagers hovering by the lab tables. When they respond, unfamiliar English accents ring out through the room. These are not your typical Blazers. 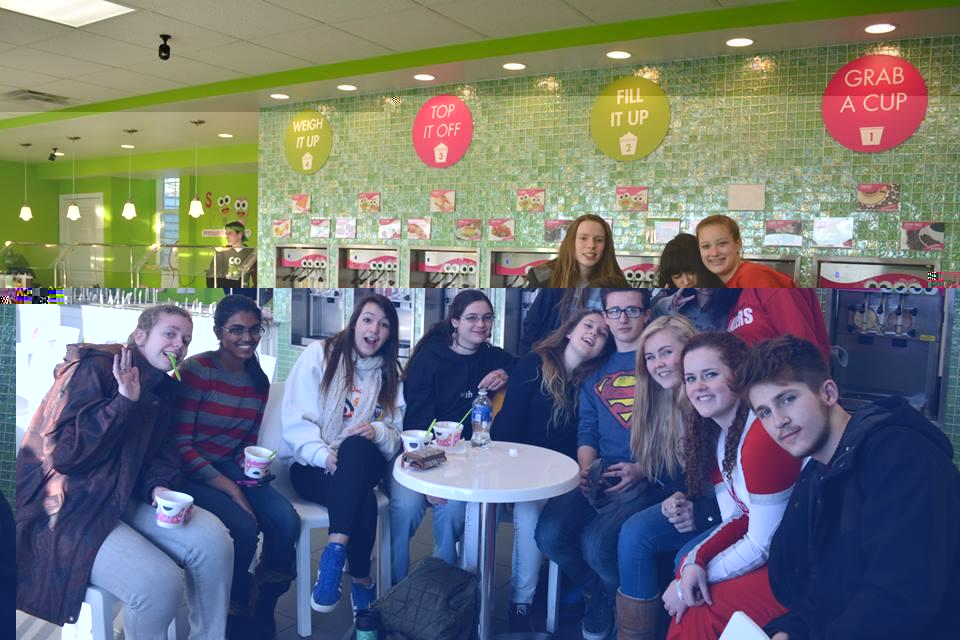 They are Year 10-12 (grades 9-11) British exchange students from St. John's Marlborough, a school in Wiltshire, England, about eighty miles from London. English and drama teacher Jordan Thorley, who coordinated the trip, says that St. John's is an international academy, meaning that the curriculum has a global emphasis. "We're very focused on the appreciation of global cultures," Thorley states. Thorley, who is a 2004 graduate of Blair's Communications and Arts Program (CAP), reached out to Blair administration two years ago to develop an exchange program between St. John's and Blair, resulting in the first exchange trip in 2013.

This year's trip was composed of both returning and new students in order to get as many students involved as possible. "I wanted to cement the positive growth and understanding that had taken place on last year's journey, but I also wanted to give a fresh cohort of students the same opportunities and experiences," Thorley says. Returning students appreciated the chance to make fresh reflections. "This year coming back, I got to observe things in more detail. I got to appreciate the way Blair is run," Year 12 student Rachel Patel notes. They were also pleased to see the people they had met the year before. "We were reacquainting ourselves with old friends," Year 12 student Matt Jones comments.

The trip was a success from the start. "Everyone was so happy to see us," Year 10 student Max Condon recalls. "It felt so nice to be accepted immediately." The exchange students spent part of the week at Blair and another part going on day trips, including a visit to the Maryland School of the Deaf and a morning volunteering at Shepherd's Table, a soup kitchen in Silver Spring. The students enjoyed visiting different areas. "Going to the deaf school was really cool. It was really interesting to see how they learned," Patel says. The volunteering was also a new experience for many of the students. "Something like that doesn't seem very accessible [in England], so to do it over there was really important to us," Jones notes.

The snow days on the Thursday and Friday of their trip threw an unexpected but appreciated wrench in the plans. Several of the students went sledding and played in the snow with their host families. "I went sledding for the first time," Year 10 student Ashlen Sowerby says. "It was so much fun!" The students said that England doesn't get very much snow. "I can't remember the last time I saw a foot of snow," Jones notes. 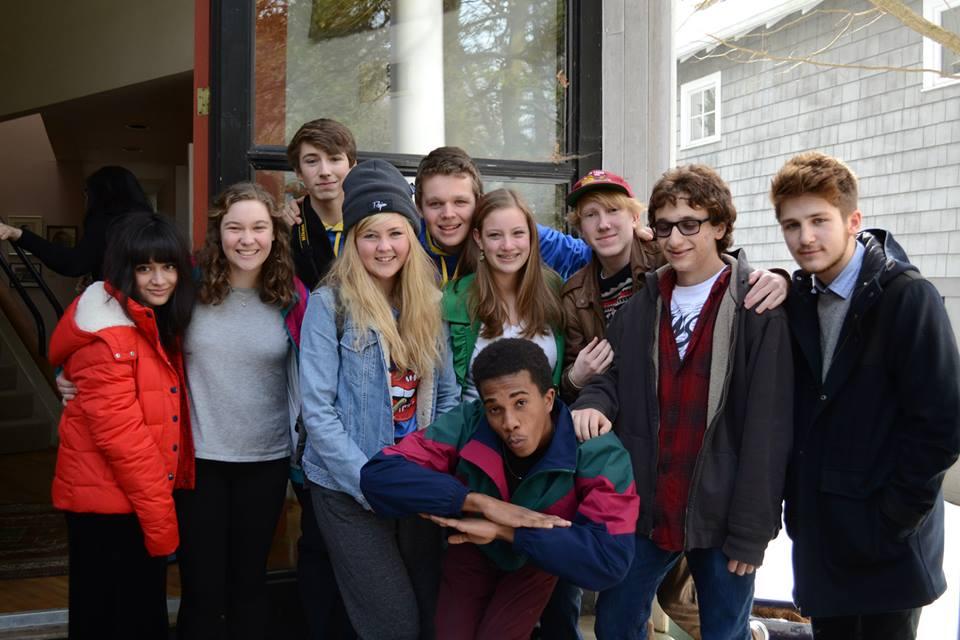 Photo: The English students who came last year as well and their host students

Photo: The English students who came last year as well and their host students

For many students, however, the best part of the trip was just the new experiences. "A lot of the week was experiencing, seeing and tasting new things, some of which I didn't know existed before," Condon says. For Sowerby, the new included contra-dancing, Hebrew school, the White House—and, most importantly, Chipotle. "First ever burrito!" she exclaims. "It was very, very filling. Really good." Condon also enjoyed tasting the finest American cuisine. "We don't have Chipotle in Britain, and that was just fantastic," he remembers.

To the students, the most notable difference between Blair and St. John's was in the student body. "In Britain, there seems to be a prototype of a perfect student," Jones notes. "In America, everyone's comfortable being unique." According to Sowerby, this variety contributes to an atmosphere of tolerance. "The people are a lot more friendly and accepting. It's just a happier place," she says. They also appreciated the diversity of the school. "I've never seen so many races in a school. It's a lot more colorful and lively," Sowerby says.

The classes were also very different from those at St. John's. "In St. John's, you can't eat or talk or anything. Blair was chill, but they still got everything done," Sowerby notes. Patel also observed a marked difference in student participation in the classes. "[In England], teachers put in 90% of the effort. [In the U.S.], there's more of a mutual relationship," Patel says.

Looking towards the future 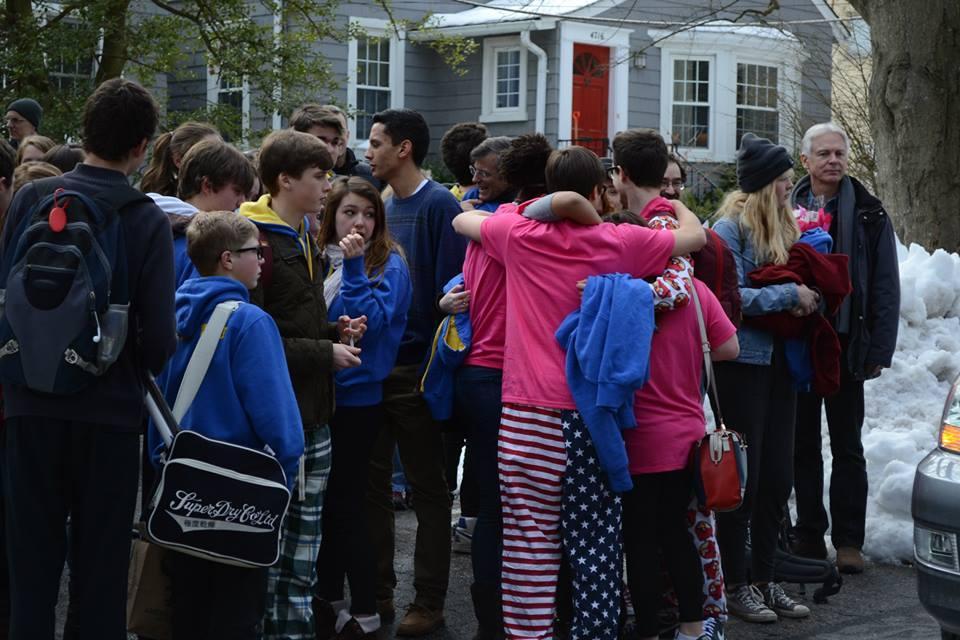 Photo: The English students just before leaving after saying their goodbyes to their host families.

Photo: The English students just before leaving after saying their goodbyes to their host families.

All of the 22 students on the trip are members of Fish & Chips, an online newspaper modelled after Silver Chips Online. The paper, which originally began as a way for students to get together and discuss global issues, updates with new articles about every three months. Students meet every Thursday to discuss stories, receive mentorship from older students and teachers and write. While at Blair, they visited Silver Chips Online to talk with students and see how the paper worked.

The students want to use the lessons learned on the trip to improve their own paper. "We hope to have an ongoing dialogue with Silver Chips Online in order to acquire inspiration and ideas for our future work," Thorley says. The writers are looking forward to developing the paper. "In the near future, I'd like to see a lot more expansion with the introduction of new writers," Patel notes. The Year 10 students are ready to get started. "I can't wait to get [the articles] down and publish them and see what people think," Sowerby states.

Though Fish & Chips started off small, its influence within St. John's is growing. "Before, not many people had heard of it," Condon remembers. "Now, articles are being looked at." Though students recognize there is a lot of work to be done, they are optimistic about its future. "It's becoming something big in our community. The future of Fish & Chips is really, really bright," Jones notes. The paper will continue independently of its connection to Blair. "My intention is that regardless of whether we are able to travel again next year, Fish & Chips will be sustained and will continue to grow," Thorley says.

The last day of the trip was emotional. "We were sad that we were leaving and happy that we had met everyone," Condon recalls. They returned to England with fond memories. "I love everything about [the U.S.]," Sowerby says. "Everyone was just so lovely. I'm definitely coming back."

For Thorley, the trip was an opportunity to watch her students grow. "As soon as you take students out of the classroom, into a real world experience, you see a whole new side of them," Thorley notes. "It's so rewarding as an educator because you see them blossom."