Five icy novels to get you ready for winter

Literary adventure for the colder months

Get out your parkas, hot cocoa and sleds and start preparing for cancelled school days, snowball fights and winter fun. Before you immerse yourself in winter cheer, have a back-up plan in case your snow dance works a little too well and you find yourself snowed in. These five novels will help you get in touch with the snowy adventure outdoors, even if you're not there.

Jump "Into Thin Air" and into tragic adventure
In 1996, a tragic storm struck Mount Everest, resulting in the death of eight determined climbers. Since this tragedy, many of the surviving climbers have written their own accounts of the incident. "Into Thin Air," written by Jon Krakauer, remains one of the most heart-wrenching and personalized memoirs. A writer for the adventure magazine "Outside," Jon Krakauer was sent to Mount Everest in May 1996 to write an article about the spring climbing season. His article soon grew into to a full-length novel, as Krakauer recognized the teams' mistakes and commemorated the dead. What started as a challenging climb soon escalated to a full-scale disaster as a storm struck, stranding many of his teammates in -100º F and 100 mph winds. 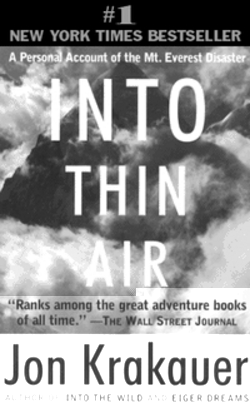 
SCO's review
Krakauer writes with true regret, plagued with survivor's guilt. The only negative aspect of the novel is the ease with which Krakauer methodically analyzes his team's mistakes withdrawn from the actual event. Although Krakauer's style is occasionally pretentious, he recounts the tragic events in such a manner that the readers feel as though they too are experiencing the danger and loss that the climbers experienced.

"His Dark Materials": Perfect for a cold night
Published in the mid-90s, Phillip Pullman's trilogy has since then affected millions and been translated into dozens of languages. The series opens as preteen Lyra Belacqua travels to the Artic with a team of witches and Gyptians in search of her missing friend, Roger. As they journey north, Lyra and her daemon, a mythical creature that every human has, slowly discover a conspiracy run by the church involving the kidnapping of and experimentation on children. Joined by an armored bear, Iorek Byrnison, Lyra and her daemon struggle to confront the cover-up while saving Lyra's friend. Her adventure culminates in an epic battle between good and evil when Lyra discovers the subject of the Church's plot, the investigation of the mysterious Dust.

SCO's review
"The Golden Compass" is only the beginning of Lyra's adventures, which are further elaborated in "The Subtle Knife" and "The Amber Spyglass." Although the trilogy targets children, the material discussed is universal and entertaining for readers of all ages. Even if the reader is not an obsessed fan, this trilogy, commencing with "The Golden Compass," will draw you in with its mystical plot and intriguing characters. The enthralling series impressed so many readers and sold so many copies that New Line Cinema plans to release a movie adaptation of the book, in 2007.

Stay "Alive" through the cold months
The adventure memoir "Alive," which was first made famous in the 70s, pulls readers in with Piers Paul Read's depictions of the characters' predicament. Be warned, some readers find that the subject matter of "Alive," which focuses on cannibalism, survival and faithlessness, too disturbing. But, if these unusual elements don't bother you, "Alive" can be a very engaging, breathtaking winter read. Written in 1975, "Alive" has the depth of any adventure novel, with an added personalized element from the original interviews of the victims.

SCO's review
Read's novel recounts the amazing survival story of a rugby team who stretch the limits of human endurance when their plane crashes in the Andes. Interspersed between the survivors' chronicles are descriptions of the parents of the team members as they attempt to find their lost children. Eventually the victims of the plane accident are forced to eat the remains of those killed in the crash, an event which sparked criticism when the team was rescued. When numerous efforts to be spotted overhead failed, several members of the team embarked on a treacherous journey to civilization. While the team's story is both awe-inspiring and moving, the only disappointment is that from the preface the reader knows that members of the team survive, diminishing the suspense.

"Arctic Incident": Not your ordinary fairies
When Irish author Eoin Colfer first published "Artemis Fowl" in 2002, no one could have predicted how popular his new fantasy hero would become. Only 12 years old, Artemis Fowl, both a computer genius and a criminal mastermind, has already tricked elusive fairy folk out of half a ton of gold gave away at the end of the first book. In "Arctic Incident," published just a year after the original, Fowl returns with his original cast. His motley crew of eccentric characters includes his muscular body-guard Butler, a Lower Elements Police officer Holly Short and a kleptomaniac dwarf Mulch on the run from the law. Together they struggle to track down a mysterious force threatening the fairy community and to locate Artemis's missing father, resulting in a spectacular escapade in the Arctic Circle. 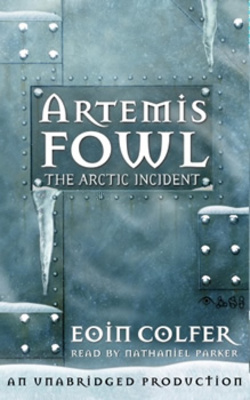 
SCO's review
Although the Artemis Fowl series, which consists of four books, several short stories and a future movie, targets young readers, some of the adult humor and quirky characters will only be appreciated by older readers. New readers won't be confused by Colfer's already-developed plot and characters, which supply enough background facts to understand the storyline. Any readers choosing to skip the first book in the series though, run the risk of ruining the secrets of the original. An easy read, "Arctic Incident" will satisfy any reader's cravings for a wintry adventure, Tolkien-esque fantasy and witty humor.

"Who Killed Olive Souffle?" Who loves mysteries?
If the previous adventure novels don't grab your attention, "Who Killed Olive Souffle" certainly will. Set at a snowed-in country inn, the tourist characters struggle to survive when the resort's chef is found murdered in the walk-in freezer. When the murder stumps the tourists, off-duty Detective Angel Cardoni, who is forced to stay at the inn, decides to investigate. Cardoni discovers much more than a murdered chef. Using Sherlock Holmes-like logic, wit worthy of "CSI" and kitchen smarts, Cardoni uncovers twists that will shock the readers.

SCO's review
With a storyline reminiscent of "Agatha Christy," Margaret Benoit's mystery novel pulls the reader in with her outlandish characters, unpredictable plot and surprising twists. At only 144 pages, "Who Killed Olive Souffle" is a perfect choice for a one-day read. Mystery fans and chefs alike will enjoy Benoit's cryptic style and will not be disappointed with the chills that this wintry novel has.

To last the winter…
A tragic climb, a corrupted church, endurance through all odds, out of ordinary fairies and a wintry "CSI." If any of these ideas grab the attention of Blazers, then these selected novels are perfect for their cold-weather needs. Even if you are not snowed in this winter, these five novels will last you through the season, satisfying all of you adventure, mystery and fantasy cravings.