Five stars for "All Star Superman"

The man of steel is back and he is ready to fight some serious crime.

From the people who brought you Batman, Justice League America and Catwoman comes a whole new series in which DC Comics retell the timeless adventures of Superman without the restricting continuity of the DC universe.

Written by Grant Morrison and drawn by Frank Quitely, "All Star Superman" contains many similar characters from traditional comics such as Lex Luthor, Lois Lane and Jimmy Olsen. The comic follows the accustomed story line where Superman, alias Clark Kent, attempts to save the world from various evil villains. 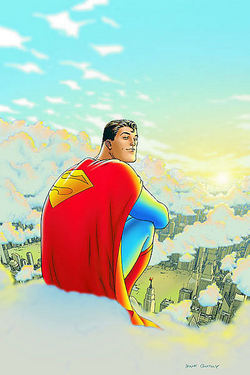 Photo: DC Comics introduces the new graphic novel, "All Star Superman," to the realm of Batman, Catwoman and Justice League America. This photo is courtesy of 4 Color Heroes.

Photo: DC Comics introduces the new graphic novel, "All Star Superman," to the realm of Batman, Catwoman and Justice League America. This photo is courtesy of 4 Color Heroes.

If readers have not read other Superman comics or seen any of the movies, they will be confused at first. If read thoroughly and slowly the comic can be easier to understand, but if the audience is unfamiliar with the characters they might as well be looking at the "Iliad" in German. Otherwise, the plot is consistent and echoes the original Superman adventures. In the first issue Superman indirectly battles Lex Luthor and has to accept the harrowing consequences of his actions. In the second issues he and Lois Lane spend time together, though Lois grows suspicious of Superman's motives.

While in many comics the facial features of a character change from panel to panel and the only identifying characteristics are their clothes, Quitely succeeds in illustrating all of the characters with graceful consistency. The only quibble that fans may have with the art is that occasionally buff Clark Kent resembles a football player with no neck. Quitely draws Lois Lane with no flaws, making her look innocent and gorgeous at the same time. Quitely manages to accurately portray her character through the art without seeming restrained.

Though the sketches are fantastic, the color and inking of the comic need work. At various points in the graphic novel the colors seem washed out and not nearly as vivid as they should be. Other than being too light, the inking beautifully sets the scene and shows different environments.

What makes this comic distinct, compared to other comics, is the crossover of characters. In issue 2 of "All Star Superman" Clark Kent nonchalantly mentions that Robin, from "Batman and Robin" is a "great kid" and he is considering taking on a sidekick.

Though "All Star Superman" may be off target in terms of simplicity and inking, it hits the bulls-eye when it comes to the overall comic. Any fans of comics in general, be they produced by Marvel, Darkhorse or DC, should purchase this comic and be prepared to dive into the amazing universe of DC Comics.