"Flags of Our Fathers" raises the standards high

A story about the truth in war

All those war movies out there, "Saving Private Ryan," "Forrest Gump" and "Pearl Harbor" all tell the same story. War sucks, but there are always the heroes fighting for their countries' values. "Flags Of Our Fathers" has no such delusions. 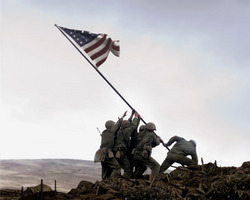 Photo: "Flags of Our Fathers" reenacts the flag raising at Iwo Jima.

Photo: "Flags of Our Fathers" reenacts the flag raising at Iwo Jima.

Director Clint Eastwood takes a creative approach to his portrayal of World War II, driving home the fact that war still sucks, but that heroes are something we create.

A heart-breaking and coldly realistic movie, "Flags" chronicles the lives of the six men who hoisted the flag on Iwo Jima. The movie is not about the flag raising; it does not portray six men fighting to honor their country. In fact, the flag that the world saw was apparently just a replacement. "No one [in the army] saw the second flag go up" except for the nerdy-looking AP photographer on the scene. It never mattered to the soldiers there.

All that mattered was not getting shot at. Set as a series of interviews by the son of John "Doc" Bradley, one of the "Heroes" of Iwo Jima, "Flags" recounts the uncomfortable memories of the soldiers and officials involved with the Iwo Jima picture. After the government saw the picture of the Iwo Jima flag raising, political propaganda takes over with a life of its own. In one of the first memories, we see the three surviving flag raisers: Pima Indian Ira Hayes, Rene Gagnon, and Bradley, rush up to the top of a mountain with rockets flying all around them to plant the flag. Everything is not what it seems though, as it turns out the "war scene" was a government pep rally in a baseball stadium, reenacting the flag raising on a paper maché mountain.

Bradley (Ryan Phillippe) is the stereotypical innocent but traumatized soldier-medic. Bradley's nature is to suppress his emotions and get on with his life, something the government does not let him do for years after he comes home. Phillippe, who played the (what a coincidence) innocent but traumatized cop in "Crash," seems to have gotten the hang of this role, playing the soldier well. The same cannot be said for Jesse Bradford, who is mediocre at best with his presentation of the showy Rene Gagnon.

Adam Beach, who also starred as a Native American Marine in "Windtalkers," plays Hayes, the most emotional of the three soldiers. Beach's portrayal of Hayes is heartbreaking, bringing out the Pima Indian's infantile vulnerability. In an almost child-like manner, Hayes cannot bear the burden of fame and represents the tortured minds of all three heroes.

None of them thought they were "heroes." To be called a hero for saving someone's life is hard enough, but to be called a hero for putting up a flag is something none of the soldiers wanted. Propaganda machines, after seeing the picture, only see a way for the country to sell more bonds. From the moment the boys come home, the press hounds them for answers.

The picture, meant to be of pure heroism, carries a feeling of tainted glory. The citizens take hope from it, and they buy bonds because of it. But the "heroes" only find guilt in it. When they see the photograph, they think of their dead friends lying on the beach and on Mount Suribachi. The photo itself was taken on the fifth day of the invasion but the battle continued for more than a month after. Within three weeks, half the men in the photo are already dead.

Added to his plot is the typical dose of violence, carnage and loud explosions. But the battles scenes are far too confusing though. With no organization at all, battle is just random people getting shot at, blown up, or killed in other creative manners. Of course, the carnage is quite creative: severed heads raining from the sky, suicide by grenade in a cave, intestines coming out of a stomach. Though not as graphic as "Saw," "Flags" is definitely not for the queasy.

In the midst of the Iraq war, everyday we receive news of another dead soldier. Some, like captured U.S. reporter Jill Carroll, become heroes. Others, like American Abu Ghraib guard Chip Frederick, have become villains. But the line is not that clear. Eastwood shows us the truth behind three "heroes," exposing an unseen side of heroism: guilt. And we are all the better for it.

Flags of Our Fathers (132 minutes, in wide release) is rated R for sequences of graphic war violence and carnage, and for language.