It's nice to know that long after football season is over, after championship rings have been handed out and after star players have been accused of sexual assault for the second time – all of the normal stuff – football isn't just shoved into the back of our minds. 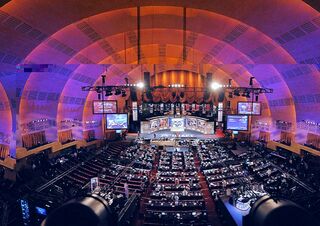 Photo: This year was the first time that the NFL Draft, held in Radio City Music Hall, was aired in primetime - the program pulled in monstrous ratings for both ESPN and the NFL Network.

Photo: This year was the first time that the NFL Draft, held in Radio City Music Hall, was aired in primetime - the program pulled in monstrous ratings for both ESPN and the NFL Network.

Amidst a barrage of baseball, a bombardment of basketball, a gripping Olympic Games and some March madness, football has re-emerged on our TVs in the form of the NFL's 2010 Draft. The college stars we learned to love or hate are graduating in earnest, and the NFL teams snatched them up faster than ninth overall pick C.J. Spiller can run the 40-yard dash (that's 4.37 seconds).

Coverage of the seven-round Draft, in fact, was spread out over three days on ESPN, ESPN2, the NFL Network and each station's respective web site, and football fans everywhere tuned in. ESPN's first round coverage was the sixth most watched program on Thursday night with 7.2 million viewers (an additional one million watched on the NFL Network), beating NBC's "The Office" and "30 Rock," Fox's "Fringe" and trumping NBA playoff games, according to the L.A. Times. A total of 45.4 million people watched the three-day coverage on the ESPN networks, which is a 16 percent increase from last year. The NFL Network saw a 24 percent increase with 5.7 million viewers tuning in and NFL.com received 61 percent more visitors than last year with 12.5 million.

But if you weren't among the millions of fans who watched the Draft, SCO is here to provide a Cliff Notes version of the most important picks. And instead of an excruciating seven rounds, we've broken our wrap-up into three rounds, simply because good things come in threes.

Round One: Local Picks
The Washington Redskins 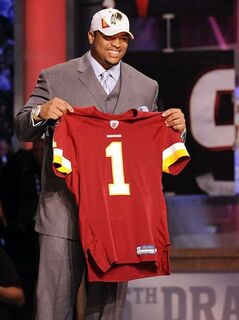 Photo: Trent Williams, an offensive tackle from Oklahoma, was the fourth overall pick in this year's Draft. He will don maroon and gold next season as a Redskin.

Photo: Trent Williams, an offensive tackle from Oklahoma, was the fourth overall pick in this year's Draft. He will don maroon and gold next season as a Redskin.

The 'Skins top two picks were Trent Williams, an offensive tackle from Oklahoma and Perry Riley, an outside linebacker from LSU. Despite rumors of a lack of work ethic, Williams will be Washington's archetypal left tackle. He has above average, though not blazing, speed and is incredibly tough (any 6'5", 315 pound man is bound to be tough). He is an excellent run-blocker, and in 2008, he was voted an All-Big 12 player. Williams was ranked second in his position in the 2010 Draft; the Redskins took him as the fourth overall pick.

Riley went 103rd overall, and will be a solid tackler throughout his pro career. Riley also controls blocks exceptionally well and has great point-of-attack instincts, and could perhaps be good enough to one day replace London Fletcher. Riley was ranked 10th in his position. Washington also took a tight end, a wide receiver, an offensive guard and a second offensive tackler. And outside of the Draft the Redskins also picked up Donovan McNabb.

The Baltimore Ravens
The Ravens first two picks came in round two, when they obtained Sergio Kindle, an outside linebacker from Texas and Terrence Cody, a defensive tackle from Alabama. Both boys have durability and stamina issues, but that's nothing a little training camp can't fix. But it's Ed Dickerson, the tight end from Oregon, who will probably do the best with Baltimore in the coming seasons. First of all, Todd Heap is on the downswing in his career and should give Dickerson many chances to contribute to the team. Dickerson could grow to be a great tackler, but he can also stretch the field and is a reliable catcher with exceptional footwork. He ran for 508 yards in his 2008 season, made 35 catches and three touchdowns. Dickerson was ranked sixth overall in his position and the Ravens took him as the 70th overall pick. In addition to the linebacker, defensive tackle and tight end, Baltimore nabbed a wide receiver, offensive tackler and a second defensive tackler and tight end. All of these receiving tight ends will definitely help Baltimore buff up its offense.

The University of Maryland
Two Terps were drafted this year, despite the team's sour season. Bruce Campbell went 106th overall and was chosen by the Oakland Raiders as the seventh offensive tackle in the Draft. Though Campbell is green, he has fantastic awareness and turned coaches' heads with his great pass protection. The Miami Dolphins took Campbell's former teammate Nolan Carroll as the 145th pick. With good top-end speed, Carroll has the physical abilities to become an explosive starter, though he was only ranked 30th in his position as cornerback. 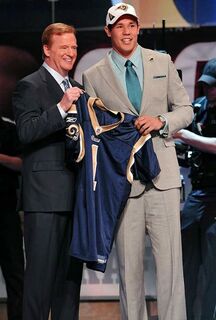 Photo: Oklahoma quarterback Sam Bradford was the first selection in this year's draft. The 2008 Heisman trophy winner will play for the St. Louis Rams next year.

Photo: Oklahoma quarterback Sam Bradford was the first selection in this year's draft. The 2008 Heisman trophy winner will play for the St. Louis Rams next year.

After months of rehab on his twice badly sprained shoulder, Bradford went number one in this year's Draft to the St. Louis Rams. The 2008 Heisman trophy winner's impressive stats, combined with his incredible focus and spectacular performance on pro day (he completed 62 out of 63 catches) caught the eyes of multiple coaches but will definitely thrive in St. Louis.

Tim Tebow, quarterback, Florida
The Bible boy himself will be suiting up for Denver this coming season. The Broncos took Tebow as the 25th overall selection and will further develop his athletic skills so that they match his leadership abilities. Though he may not play as a quarterback (he's more suited to be a half back), Tebow couldn't possibly bring the Broncos down.

Colt McCoy, quarterback, Texas
McCoy went to the Cleveland Browns in the third round, as the overall 85th pick. McCoy's fantastic instincts and leadership skills make him special, and the Browns will help him develop his arm. And thanks to Delhomme's inconsistency, the former Longhorn might even get to see some playing time next season.

Ndamukong Suh, defensive tackle, Nebraska
Suh touched first touched our hearts with his inspiring story at the Heisman award ceremony this year, but months later was the second overall selection in the Draft, going to the Detroit Lions. Suh is incredibly strong and reliable and will soon be able to regularly get at NFL QB's without a problem thanks to his outstanding balance of athleticism and quick thinking. He'll help Detroit's struggling defense out quite a bit.

Toby Gerhart, running back, Stanford
Gerhart, like Suh, was a Heisman finalist this year. He was also drafted as the 51st overall selection by the Minnesota Vikings, and was the only top college player to be drafted by an above-average team. Though Gerhart probably won't see much playing time, he is multifaceted and if used efficiently, could be a great addition to the Vik's franchise.

Round Three: Who Played It Best
Seattle Seahawks
The Seattle Seahawks out-Drafted 31 other NFL teams in this year's Draft! While the 'Hawks can't seem to find similar success during the season, they'll have some talented fresh faces to put to use. Seattle grabbed the number-one ranked offensive tackle, Russell Okung from Oklahoma State, as well as the number-two safety, Earl Thomas from Texas. On top of acquiring two spectacular players, the Seahawks drafted a well-rounded variety of players who will undoubtedly add to the team in the coming seasons. Other noteworthy mentions as far as total-team success goes include the Patriots, the Ravens and the Eagles.