The boys' basketball team hoped their season opener would prove to the community that the program had reversed its fortunes. Instead, the Blazers reverted back to the bad habits that have plagued Blair basketball for nearly a decade: turnovers, lackadaisical defense and poor shot selection. The result was a disappointing 58-39 home loss last night to the Kennedy Cavaliers, who took advantage of Blair's mistakes, turning the turnovers into easy buckets. 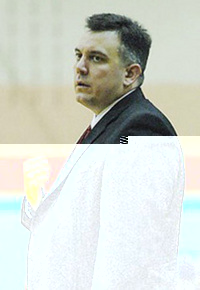 Photo: Mark DeStefano, coaching his first year at Blair, paces the sidelines against Kennedy. Although upset with Blair's loss to start the season, DeStefano remains confident in his team's ability.

Photo: Mark DeStefano, coaching his first year at Blair, paces the sidelines against Kennedy. Although upset with Blair's loss to start the season, DeStefano remains confident in his team's ability.

First-year head coach Mark DeStefano was displeased with the loss but said he was optimistic about the season as a whole. "In stretches we played very well and we had a good idea to what we were doing," he said. "For instance, the comeback from an early deficit in the first half. Unfortunately we couldn't continue the run."

Kennedy senior Jeremy Herring, a Division I prospect who likely will play at Sacred Heart next season, shredded apart the Blazer defense the entire game. The Cavaliers' leader backed up his star status by throwing down dunks and connecting from long range to finish with a game-high 24 points. Herring was an example of what the Blazers lack: a player who can create his own shots and take over a game when the team's offense is stagnant.

Blair showed signs of jitters and inexperience early Tuesday night. Senior swingman Ross Williams was whistled for an offensive foul on the Blazers' first possession and had his shot blocked on the second. After giving up an easy three-pointer at the other end, Blair finally got on the board when Williams made the second of two free throws. Senior forward Muhammad Roberson knotted the score at 3 off a feed from senior point guard Darius Smith with six minutes to go in the first quarter. The Blair offense shut down thereafter, as Kennedy went on a 10-0 run, and forced the Blazers to turn the ball over numerous times.

The Blazers stopped the bleeding with 2:20 left in the first, when senior Matt McClain connected on a technical free throw. Blair then went on a run of their own, as Williams stole the ball, after McClain misfired on his second shot, and swung the ball to forward Tori Patton, who hit a twisting runner in the lane to bring the Blazers within seven. With one minute left in the quarter, McClain scooped up a loose ball and found a streaking Williams downcourt for a wide-open dunk. On the next possession, Smith drained a pull-up three-pointer, and the Blazers ended the first quarter on an 8-0 run. 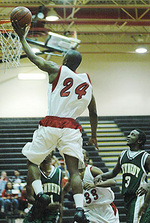 Photo:
The pace slowed significantly in the second quarter, as two quick fouls by Blair center Sam Francois helped the Cavaliers regain the lead. But reserve forward Isadore Melton provided the Blazers with a spark off the bench, battling inside for back-to-back baskets and adding a block and a steal to his statsheet. After McClain drilled a three, the Blazers found themselves leading 18-16 midway through the quarter.

But after a timely timeout by the Cavaliers, Blair's momentum disappeared. The Blazers were nagged by careless passing and poor defense, as Kennedy quit shooting outside jumpers and finally pounded the ball inside, exposing Blair's lack of a defensive presence in the paint. The Cavaliers split double-teams and side-stepped traps on their way to taking back the lead at halftime, 25-22.

Coach DeStefano attributed the halftime deficit to a lack of hustle on the part of the Blazers. "Effort, flat out effort," he said. "We didn't run the floor on defense, allowing them to score[in transition]."

The second half brought more bad news for the Blazers, who found themselves in an early hole. Following a Blair turnover with less than four minutes to play in the third quarter, Herring was left alone for an open dunk. Williams hustled downcourt to disrupt the shot, but was called for an intentional foul, giving Kennedy two technical free throws and possession. The sequence put the Cavaliers up 31-24.

With two minutes to play in the third, Blair finally had something to cheer about. Smith tiptoed the sideline for a slick steal and threw the ball blindly cross-court to streaking junior guard Milton Colquehon, who drew a defender and flipped the rock back over his head for a perfect no-look return pass to Smith, who layed the ball in for two of his seven points. Unfortunately, the Blazers came crashing back to reality, as Herring hit a deep three-pointer as the buzzer sounded, leaving the Blazers trailing 38-30 after three quarters of play.

The fourth quarter was all Kennedy, as the Blazers struggled to stick to fundamentals and showed a lack of intensity. The fact that Herring continued to put on a show was of no help to Blair either. Thirty seconds into the quarter, Herring spun away from the hoop and fired a Jordan-esque fadeaway jumper in the face of williams' staunch defense. The ball ripped through the net to give Kennedy a ten-point edge. On the Blazers' next possession, an errant through-the-legs dribble by Smith landed in the first row of the stands.

DeStefano called a timeout with five minutes to go in the game and urged his players to summon the energy to make a comeback. He urged his players not to "play like the old Blair" and have a sense of pride. Unfortunately for the Blazers, the timeout further drained the tired squad, and Kennedy jumped out in front, 47-35, with four minutes to play. DeStefano emptied the bench in the final minutes, and a tomahawk slam from Herring with a minute to play put the exclamation point on the Cavaliers' 58-39 win.

Williams, who finished with eight points, blamed the loss on the Blazers' shortcomings from the defensive end and bad shot selection. "People missed shots they usually hit," he said. Indeed, the Blazers' shot horrendously from the field and made just three three-point field goals in the game, despite firing upwards of a dozen times from long-range.

Looking forward, DeStefano said it will be tough for him to implant his system without being at Blair during the day with his players. "The biggest difficulty is not being in the building, where I would be better able to reinforce the ideas we instill in our two hours of practice," said DeStefano. "It makes practice that much more important."

The boys' varsity basketball team's next home game is Friday, December 8 at 7 p.m. against Einstein.

Abe Schwadron. Abe is a huge basketball, baseball, and football fan that likes to read up on sports in SLAM, Sports Illustrated, and ESPN magazines. Hobbies include streetball, poker and film-making. A sneaker addict, Abe likes to keep his kicks fresh. Abe likes reggae and hip-hop music, ... More »