For football: recover and rebuild

Last year, Blair's varsity football team was only one win away from a playoff berth. The Blazers lost to former state champions Damascus in their final game, ending the season at 6-4. This year, the Blazers have won only two games and stand at a dismal 2-7. Riding on last year's success, Blair seemed likely to shine again this season. But the Blazers graduated several key seniors last year and were left with a young nucleus of players, many of whom had little to no varsity-level experience. 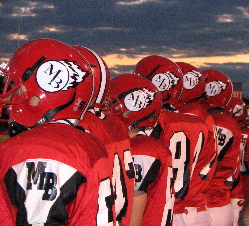 The speed and level of aggression in varsity football makes it a completely different sport from junior varsity, according to offensive coordinator James Short. With only four returning starters on offense and four returning starters on defense, the team's relatively inexperienced players had to step up their game while struggling to adapt to the caliber of varsity football. On offense, the team graduated three linemen and key players fullback Jacob Wade, who currently plays Division I football at Villanova, wide receiver Tyrel Flowers-Jackson and quarterback Aaron Simon, vacating positions that have been hard to fill. After playing seniors Ross Williams and Darius Smith at quarterback, the coaches pulled freshman Alex Egber from the junior varsity team to fill the position. Egber has played pickup games of football but has never been on an organized team before.

Meanwhile, the experienced players have found themselves with new leadership roles on the team. "This year I had to step and become a leader for the first time ever," said Williams. Co-captains Rodger Brown and Smith agree, adding that Blair is missing players who can command the team as Wade and offensive lineman Ian Proctor had done last year.

Another major factor hindering Blair's performance is the slew of injuries that have plagued the team this season. "It's been unbelievable," said head coach Jeffery Seals, referring to the numerous injuries the Blazers have faced. Key players were injured before the season even started. Williams suffered a shoulder injury during preseason and has not been in full performance all year, injuring his back and foot in later games. Steven Jimenez, last year's starting linebacker, hurt his knee over the summer and then moved to Texas.

The injuries have followed Blair into the season and affected nine players, including senior Tori Patton, a key defensive player, who tore his rotator cup five games into the season. According to Seals, the Blazers have not had a single game where every player was healthy and able to play. Because of the frequent injuries, Blair's coaches were forced to move players around in the lineup. Players usually know their positions in preseason, but this year, only a few Blazers have held consistent positions.

For Seals, success boils down to commitment in the offseason. "Football is not an easy sport," said Seals. "You're always being hit or hitting somebody. You gotta be in shape." Short adds that football is even more difficult for Blair because of the division the team plays in. "We play in one of the best 4A leagues in the state," he said.

Both coaches agree that the players have worked hard all season. But no matter how much heart a team has, to survive in the world of varsity football, it needs experienced players – a component that Blair is lacking this season.

Short calls this year a "rebuilding" year for Blair. "The team is emerging," he said. Next year, Blair will return more players on offense and defense than this year, and thus pick up with a seasoned squad.

"Football is like life," said Seals. "Sometimes things don't run smooth and there are bumps in the road. Right now we have to face a really big bump in the road, and we just have to ride it out."