For one senior with Asperger's, the world operates on a different plane

A different kind of boy

Each day at school, senior Alex Mont eats lunch by himself in Room 310, three floors above the noise and chaos of the student cafeteria. He has been eating the same lunch every day for the past 10 years: a peanut butter and jelly sandwich, grapes, carrots and cookies. In the quiet room, he pores over his math homework, sometimes smiling over a particularly hard problem.

There are two floors between Alex and the crowded cafeteria below, but in many ways entire worlds separate him from the noisy students on the first floor. 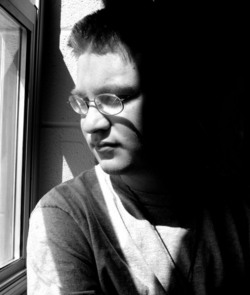 Photo: Senior Alex Mont takes a moment to look out the window during his American Studies class.

Photo: Senior Alex Mont takes a moment to look out the window during his American Studies class.

Alex has Asperger's Syndrome, a high-functioning form of autism. Asperger's is characterized by repetitive routines, peculiarities in speech and socially or emotionally inappropriate behavior, according to the National Institute of Neurological Disorders and Stroke. Children with Asperger's often have problems reading social cues; some exhibit exceptional talent in a specific area.

Many people perceive autistic individuals to be severely disadvantaged and isolated because of their condition. For Alex's parents, adapting to their son's condition has caused them to realize that though his world is often different from theirs, it comes with its own set of advantages - and that autism is not a separate characteristic of Alex, but an important part of who he is.

Alex spent four years trying to learn the meaning of a smile. His teachers used flash cards to help him memorize different facial expressions - a grin for joy and a frown for sadness. For five years, specialists worked to teach him how to have a conversation. And yet during these elementary school years, he raced through multiple square roots and transcendental numbers, mastered concepts in calculus and discovered shortcuts to equations that Harvard graduates failed to find. 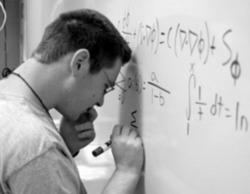 At first, Alex's teachers were reluctant to instruct him in social skills, claiming he was merely a victim of uneven development. His obvious talent seemed to contradict a need for special assistance: Alex was one of seven fourth graders out of 85,000 students to ace the U.S. Math Olympiad (USAMO). The following year, he finished second in a national math talent search.

Alex recalls participating in the USAMO, the most rigorous and selective math competition for students in America. "I wasn't really nervous," he says, smiling. A dimple forms in his right cheek. "It's fun doing these competitions."

Despite his academic abilities, it became apparent as early as first grade that Alex would not develop social skills on his own.

As a child, Alex expected life to function like a math equation: systematically and logically. In the social world, there are exceptions to every rule, and Alex would have a "meltdown"? each time a rule was broken, according to Alex's father, Daniel Mont. Alex desperately wanted the world to be structured; if one rule could be broken, then every rule could be broken, which meant that the world descended into chaos.

During meltdowns, he would scream and cry, hide under desks and throw himself to the floor. His parents remember taking him to a speech therapist because of a "constant whine" in his voice. The therapist told them that the tension in Alex's voice was not his natural voice; Alex was simply in a near-perpetual state of stress.

"[For Alex] as a child, the world was nothing short of frightening,"? says Nanette Goodman, Alex's mother, "but as he got older, all of it relaxed. Once he understood the world, he could live in it."

Daniel and Goodman have done their best to teach Alex the ways of the neurologically typical, in hopes that he'll be able to ease himself into the social world with fewer problems. "You have to pick your battles,"? says Goodman. "I mean, it would be nice if Alex always made eye contact when speaking to you, and if he always said 'please' and 'thank you,' but it's more important that he doesn't start playing with your shirt."

No one ever wanted to be Alex. Throughout elementary school, says Daniel, children were awed by Alex's brilliance but didn't envy the invisible walls that seemed to follow him wherever he went. He cried for reasons they didn't understand, rarely recognized people he'd been in school with for years and would hide under tables when frustrated. Today he never cries in class, but he panics when he hears loud noises and struggles to understand social cues.

He still has no friends his age.

People don't understand or even pity his social situation. But if you ask Alex, they've got it all wrong.

"Just because [people with Asperger's] might seem socially out of the mainstream doesn't necessarily mean that we're stupid or incompetent or don't understand," he says. "It could mean that we don't value social interaction in the way that other people do, or that there are certain aspects of social interaction we've decided to reject."

In middle school, students bullied Alex by tripping him in the hallways, harassing him in the locker room and throwing rocks at him. The bullying had no emotional impact, says Alex - it was purely a physical hassle that he dealt with by speaking to teachers. People who seek peer approval would have been too self-conscious to ask for help, he says. He wasn't. In this regard, he believes Asperger's is an advantage.

During his freshman year, Alex joined a support group for teens with social difficulties so that he could learn about the values of friendship. "I didn't know how to go about making friends," he says. Laughing, he adds: "It's like, do you just install something?"

The rejection stories he heard at the group were "horrific,"? he remembers. "I only half-jokingly remarked, 'Well, if trying to make friends is this dangerous, then it's a good thing I didn't get started too early!'"?

"I thought of a way to describe my attitude about this,"? he says, a smile creeping across his face. "Life is like a computer game,"? he begins. "Mine's just better because it has a single-player mode." He collapses with laughter, grabbing his head and rocking back and forth.

After a minute, he collects himself. "Wait, scratch out 'better' and put in 'different.' It's not about better or not better; there's benefits to having friends too. I guess my point is that not having friends is not something to be ashamed of - it's just a different approach."

Alex's unique attitude toward life has constantly forced his parents to re-evaluate the way in which they saw the world, says Goodman. She remembers visiting Alex's elementary school and seeing all the kids playing with friends while Alex ate by himself. "It breaks your heart,"? she says. "Alex doesn't crave that sort of bonding. I still don't really deep in my heart get it."

Standing before his government class on March 23, Alex is dressed up to give a presentation. He wears a blue button-down shirt, gray pants and a red tie. Yet even in professional attire, his appearance seems to betray that to him, image is irrelevant. The shirt is untucked, and beneath his dress pants are a pair of tennis shoes. His hair sticks out in a few odd places.

He asks a question, then calls on his classmates. "Uh..."? He struggles to remember the name. "That guy back there.?: Another hand is raised. "Um, who are you?" The girl raising her hand gave a half-hour presentation at the beginning of the period. Finally, he remembers. "Pria! Pria!"? A minute later, he confuses the names of two classmates.

Since childhood, Alex has had difficulty recognizing faces. In second grade, he mistook a classmate for his brother. When his mother asked if he could recognize her in a line-up of women, he said: "It would depend on what the other women looked like."

Alex's limited capacity for remembering faces is one of many similar eccentricities, all of which reveal that he has an extremely unique way of perceiving his surroundings, according to Goodman. "His sense of the physical world is just weird," she says, recalling a day when he couldn't find the closet in his room because the closet doors, usually open, were closed.

As students respond to Alex's discussion questions, he smiles to himself, rolling and unrolling his tie, fiddling with the white plug of the teacher's laptop. This time, when he calls on the boy who spoke a few minutes ago, Alex gets his name right.

For people with Asperger's, the world of the neurologically typical is mysterious and confusing in nearly every aspect of social experience, writes Daniel in "A Different Kind of Boy,"? a book he wrote about Alex. As Alex's parents spent years coaching their son on the concepts of personal space ("He would pet people's faces"?), modesty ("He'd emerge outside au naturel while we were chatting with neighbors"?) and phrases not to say ("He'd ask his grandma why she was so fat"?), they struggled to explain human patterns of thought that weren't logical.

Today, Alex's parents still marvel at his inability to comprehend racism, sexism and other human biases. "[Most people] can't help but come with all this societal baggage,"? says Goodman. "Various attitudes have just seeped into you. But that's not true for Alex. He's taken implicit association tests that reveal hidden biases that most people have - Alex has none."

Alex recently wrote a paper entitled "The Chains of Friendship: An Autistic Person's Perspective on Interpersonal Relations."? He examined peer pressure and the self-destructive behaviors that some people adopt in order to be accepted.

In his essay, Alex writes:

"While everybody likes to talk about how interpersonal relationships are more valuable than anything material, for me the opposite is true: material things are more predictable, while relationships can swing from rewarding and fulfilling to excruciatingly painful with no rhyme or reason. I just don't know why any willing person would subject themselves to that kind of torture. I guess I'll never know."

Sidebar:
Recent epidemiology studies have shown that autism spectrum disorders are 10 times more prevalent than they were just 10 years ago, according to the National Alliance for Autism Research. Autism is the second most common developmental disability, next to mental retardation. In January 2004, the Centers for Disease Control and Prevention, along with the American Academy of Pediatrics, estimated that one in 166 children are currently being diagnosed with autism.