While neither snow nor rain nor heat nor gloom of night prevents the post office from delivering the mail, the federal government aiming to defund it might. Over the past few months, President Donald Trump has expressed his opposition to funding the United States Postal Service (USPS) on the grounds that he fears voting by mail will increase voter fraud. 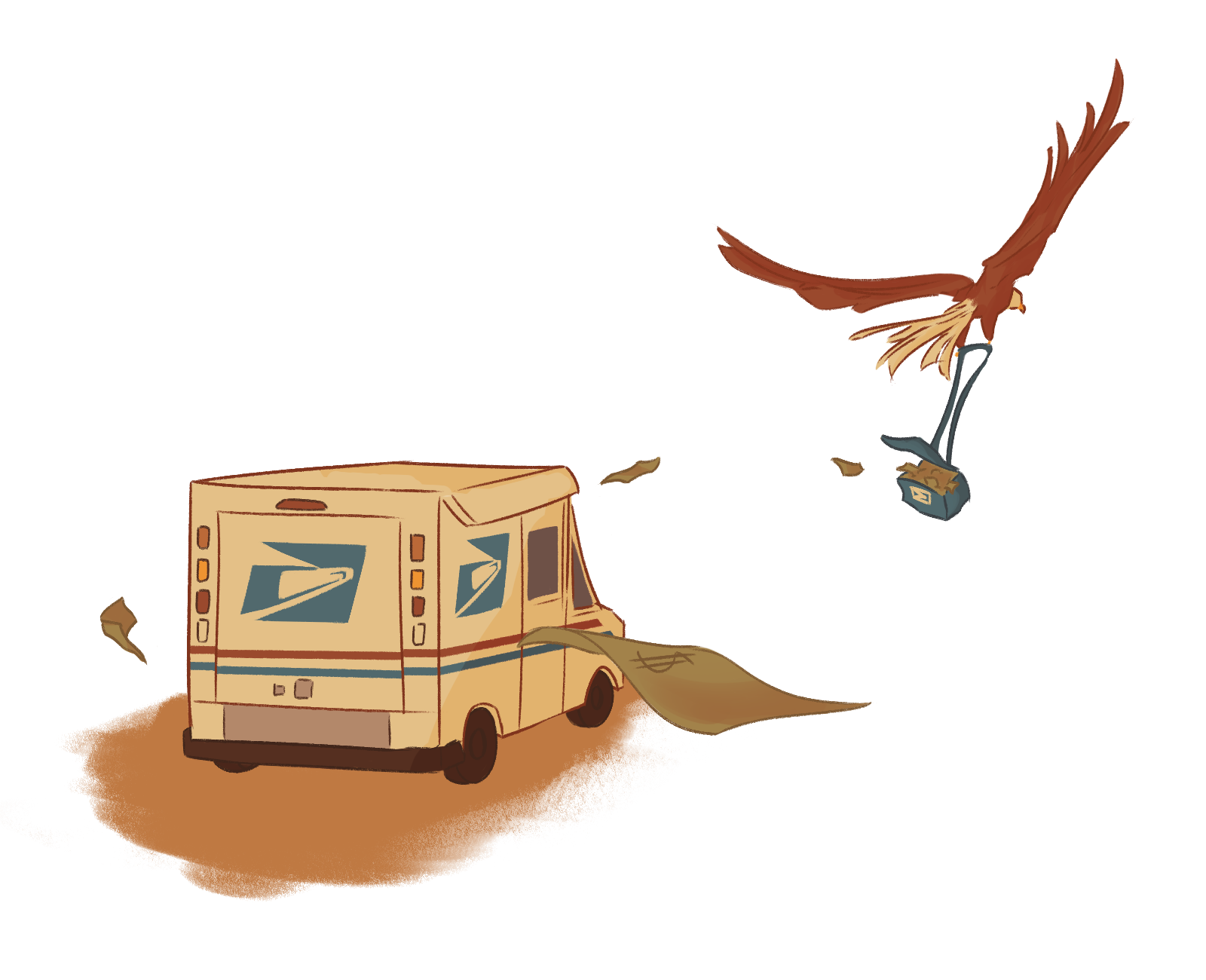 Article I, Section 8 of the U.S. Constitution gives Congress the power to establish post offices and post roads (mail routes). As a result, the USPS has existed in some capacity since 1775.

“The post office helped to create America,” Jamie Raskin, the elected representative for Maryland’s 8th Congressional District, says. “Before we had a post office, [we] had 13 separate, distant, and disconnected colonies, really with their own currencies, their own commercial lives, their own cultural and political lives. [The post office] gave us the skeleton of a national economy, a national communications system, and national politics.”

Contrary to popular belief, the USPS is a government agency, not a government-owned corporation, and was never meant to turn a profit. The USPS has managed to stay afloat in recent years despite receiving little to no federal funding, but it has been running a large debt for some time and mainly subsists on funds from postage and package sales.

As the election approaches, the post office needs a sizable amount of money to prepare for the influx of mail-in ballots. The bipartisan, Trump-appointed Board of Governors tasked with finding the exact amount of money the USPS needs this budget cycle placed the estimate at $25 billion. Trump has repeatedly bashed this number, saying it will go to “fraudulent” voting, going so far as to call the mail-in votes “the greatest fraud in the history of elections.”

If Congress passes a relief bill to fund the USPS, however, then Trump, as the chief executive of the nation, must carry out its will. “Congress has the power to establish a post office. Congress has the power to say here's how the post office will operate,” Mark Graber, a Regents Professor at the University System of Maryland and one of the country’s leading experts on constitutional law and politics, says. “If Congress passes a law that says the post office should be delivering the mail, the President has an obligation to… execute that law.”

Trump can attempt to veto the spending bill that will fund the post office, but if Congress overrides his veto with a supermajority vote––or a two-thirds majority––Trump cannot deny the USPS funding.

Although Trump’s calls to defund the post office stem from his concern of fraudulent voting, his actions affect many of the post office’s other important functions. “I had lots of constituents who were waiting for their heart medication, or if they were diabetic, their insulin. People were extremely agitated about where their medicines were,” Raskin says. “There were also tons of small businesses that were having problems either receiving materials or sending out packages.”

Many demonstrations have sprung up in the Montgomery County area protesting Trump’s call to block funding for the USPS and the subsequent ramifications that the local community has already begun to experience. Anna White, a Silver Spring resident who organized a protest at the Silver Spring post office, says, “The message of the rallies was to save the postal service, and not remove any more [mail deposit boxes].” White also emphasized the protestors’ desire to “make sure we can trust in the postal service to mail ballots––and for our democracy.”

For the Montgomery County Board of Elections (BOE), Trump’s threats to the post office are not a tremendous cause of concern. The Board has developed alternate methods of submitting ballots that don’t rely on postal services, according to Gilberto Zelaya, the public information officer at the Montgomery County BOE. “Once you get your ballot, you have two options: you either send it back through the post office, but if you're really concerned about the post office, then you have up to 50 ballot drop boxes,” Zelaya says.

Zelaya emphasizes that problems with the post office should not impede a voter’s ability to cast their vote: “If you think that the post office is a barrier, then use the ballot dropbox.”

The Montgomery County BOE’s budget is $8,375,091. In comparison, the entire state of New York’s BOE has a budget of $11.6 million. The state of Alabama comes in with $8,646,239, only slightly more than Montgomery County. As Raskin says, “Maryland as a state has made pretty substantial investments in the electoral system.”

Due to its large budget, Montgomery County does not have to worry about focusing on one voting option over another to save money. This financial freedom allows Montgomery County to run a hybrid method of voting, giving its citizens many different ways to vote.

Ballot boxes, for example, are a costly endeavor. The average ballot box costs about $6,000, according to the Cybersecurity and Infrastructure Security Agency’s Elections Infrastructure Government Coordinating Council, which means that the Montgomery County BOE spends around $300,000 on ballot boxes alone. However, the box itself is not the only cost, as they are cleared out twice a day and must be monitored.

Another benefit Montgomery County voters have access to is accurate and plentiful information. “People who live in our district have access to a lot of good information,” Raskin says. “We're able to sort through all the propaganda and disinformation that has been put out. So in that sense, we're more resilient to recover from the effects of all the president's propaganda.” Despite this, Raskin furthers, “...everybody needs to have a voting plan.”

Montgomery County’s affluence has given the area the ability to overcome the obstacle of a weakened USPS. But, for less wealthy parts of the country and localities with less funding allocated for elections, Trump’s funding block could prove to be a much bigger problem.

Implications for the rest of the country

While the post office claims it will be able to keep up with the influx of mail-in ballots, it has also released statements saying that voters should mail their ballots at least a week before the election to make sure that they get in on time. This means that voters will need to submit their ballots on Oct. 27, a week before the official Election Day of Nov. 3, to ensure their votes are counted.

policies in some states that prohibit counting late mail-in ballots. In the 2020 Democratic presidential primary election, over 65,000 ballots were rejected because they arrived late. With over 30 percent of the total ballots cast in this election predicted to be sent through the mail, the USPS will be attempting to process a significantly larger number of ballots than it did in the primaries. To facilitate mail-in voting, nine states plus Washington, D.C. are mailing ballots to all registered voters;nine other states, including Maryland, are mailing applications for requesting a mail-in ballot to all registered voters.

Trump has repeatedly accused mail-in voting of causing rampant voter fraud, saying, “We want people to vote so that when they vote, it means one vote.”

However, there is little evidence of voter fraud increasing substantially with mail-in ballots. In fact, there is little evidence of voter fraud actually being a problem in United States elections at all. “There's almost been as much voter fraud as there has been alien invasion,” Graber says. “No president has ever worried about mail-in voting fraud because it doesn't happen.” Despite evidence to the contrary, the president still insists on denying the USPS funding on these grounds.

Historically, the Republican Party––which Trump is a part of––has tended to benefit from absentee and mail-in voting. “The Republicans have always been able to use effective absentee balloting and they have won big races and small races because of it,” Sarah Farnsworth, a local election judge, says. “They know how to run that structure this year. They could have easily done very well by this, except that their White House occupant is giving a totally different message than the message that they have honed and perfected for over 40 years.”

Trump’s recent attacks on the post office have created many potential issues for voters. With COVID-19 still affecting thousands nationwide, and lower-income areas disproportionately bearing the brunt, those who live in the least affluent areas or in localities with less money set aside for elections will be the most impacted by the results of the coming election––and the most likely to have their votes jeopardized.