Overcoming the difficulties of living in a foreign country 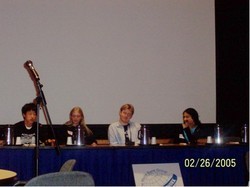 Photo: The four panelists who talked about their experiences of moving to America

Photo: The four panelists who talked about their experiences of moving to America

On a cloudy Sunday morning they congregated, students representing countries of the world: Switzerland, New Zealand, Morocco, Zambia, India, Germany and many others, to discuss topics such as relocation, education, making friends, learning the culture of their host country and their new school. 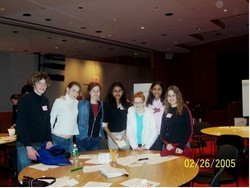 Photo: Students from the conference

Photo: Students from the conference

The Teen Forum began with the introduction by James Wolfensohn, the World Bank president, who welcomed the young people and said he hoped to host more gatherings of the sort in the future; pointing out that the young generation is a very important part of the present world. "On the planet of six billion people, a third of the planet is under the age of fourteen.” After roughly five minutes of welcoming he stated that he had to leave "because as they tell me, I am not young enough to participate in the discussions.”

Once Wolfensohn left, the moderator of the forum, Brian Dickson, who has had 40 years of education experience, ranging from the teaching in Chile to being a principal of International Schools in three countries for 15 years, began the discussions by asking the teenagers at the ten different tables to introduce themselves. After the introductions, the discussions were launched.

One of the biggest problems discussed was culture shock, which was singled out as one of the foreign exchange students' major concern in coming to America. Culture shock was defined as "the experience of encountering a culture different from the familiar one.” Almost everyone in the room admitted that they went through some sort of cultural shock after arriving in America.

One teenager, freshman Carlos Belausteguigoitia, who attends Whitman high school, voiced his difficulties in getting used to the American way of living. "I don't like and agree with certain ideals in America, one of them being individualism, when you live for and care about your own things and don't help others,” said Belausteguigoitia. In Swededn, where he lived for three years prior to moving to America, Belausteguigoitia believes that people care more about others than they do here.

He gave an example of how in Potomac "people live in huge mansions, which they don't even need, but there are also so many people who live on the streets and beg for food.” In Sweden, according to Belausteguigoitia, there are almost no poor people on the streets, because everyone cares for one another.

Another topic that was discussed during the meeting was "survival skills,” things that foreign exchange students could do to overcome the shock and other barriers in a new country. Some survival skills that the students came up with during their discussions were joining a sports team or a club, and not being afraid to ask questions when not understanding something.

As the students began to give their own examples of how they used these "survival skills,” it became evident that these skills are indeed proven to work, as long as one is willing to overcome other obstacles in the way.

For example, 21 year old Mayoba Mubague, a student at Montgomery College (MC) in Rockville, came to America from Zambia in April of 2004, talked about joining the basketball team at MC as her "survival skill.” Although she made the team, she was mostly forced to sit on the bench during the games, because the basketball coach assumed Mubague, being from Africa, didn't know how to play basketball.

However, during one of the games, in which Mubague played for only five minutes, she was able to prove to her team and coach that she was up to par and skilled in basketball. "In those five minutes, I made eight points. That proved to my coach that it was indeed something I could do. From then on the relationship between me and my team drastically changed for the better,” said Mubague.

The end and the beginning

Once the forum was finished students piled out of the auditorium. The closing of the forum signified the start of new friendships, but most importantly provided the foreign exchange students with an understanding that they were not going through difficulties by themselves. As Mubague explains, "It helped me realize that I was not the only person going through the same thing and that other people had similar problems and I was not alone.”