'56 graduate was a star pitcher for Blair, Baltimore Orioles

Former professional baseball player and Blair alumnus Steve Barber died on Feb. 4. A native of Takoma Park, Barber was a member of the class of 1956 and a star pitcher for Blair's baseball team. He was the first 20-game winner of the modern-era Baltimore Orioles and an inductee into the Orioles Hall of Fame, as well as the Maryland Athletic Hall of Fame.

On the mound, the left-handed Barber was known for both his electric fastball and his wildness. Early in his career, Barber was a prolific starter, but succumbed to various elbow injuries before finishing his career as a journeyman reliever. 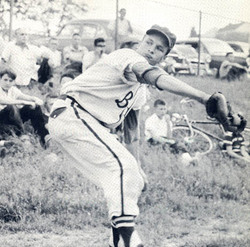 Hall of Fame pitcher Jim Palmer, one of Barber's contemporaries and a teammate with the Orioles, spoke highly of him, saying that "[Barber] had some elbow problems, but he was a very accomplished pitcher. And he was a good guy." Outfielder Paul Blair, another former Oriole, once called Barber "the perfect teammate."

The former Blazer is perhaps best known in the baseball community for his role in one of the wildest and most bizarre no-hitters in baseball history. Two weeks after taking a no-hitter into the ninth inning against the California Angels Barber took the mound against the Detroit Tigers on Apr. 30, 1967. With a 1-0 lead, Barber pitched 8 2/3 hitless innings before being pulled for reliever Stu Miller after allowing the tying run on a wild pitch. The Tigers proceeded to score the go-ahead run off of an error. The final result was a 2-1 loss for Baltimore, despite the combined no-hitter by Barber and Miller.

At Blair, Barber was an integral part of the 1955-1956 team that lost just one game all year. He signed with the Orioles directly after graduation and bypassed a collegiate career.