Sebastian Johnson does not make the final five cut

Blair graduate Sebastian Johnson's attempt to fill the vacancy on the Board of Education left by Valerie Ervin fell short when the Board did not select him as one of the five finalists on Monday.

Of the 20 candidates who applied for the District 4 position, only five were chosen to move on in the selection process for an interview with the Board in a public session on Saturday. Following the interviews, the Board will vote on the appointment, which will be decided by a majority vote of four members.

As a former Student Member of the Board (SMOB, '05-'06), Johnson believed he possessed the qualities necessary to effectively serve on the Board. "I was a viable candidate," he said. "I was really disappointed that I didn't go further." 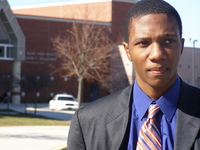 Photo: Former Blair graduate Sebastian Johnson. Johnson, who applied unsuccessfully for a position on the board, was the Student Member of the Board last year.

Photo: Former Blair graduate Sebastian Johnson. Johnson, who applied unsuccessfully for a position on the board, was the Student Member of the Board last year.

Johnson, 18, acknowledges that his age and status as a full-time college student may have deterred some Board members from selecting him for an interview. "For some members, age did play a role," he said.

Johnson noted that the candidates chosen have been successful advocates in the community and understand the goals of the Board. He supports Chris Barclay, one of the five finalists, for Board seat. "He received the most votes out of the committee members, and he's been active in politics and the county PTSA," Johnson said. "I think he'll be a good member."

As for his next step in his involvement in the local political arena, Johnson does not have any particular position in mind. "I don't have any future aspirations at the moment," he said.

Johnson looks to continue working towards making public education better. "I'm still definitely paying attention to the issues before the Board, especially opportunities for students and the curriculum," he said. "I've made it a lifelong goal to work to improve the educational system."

Kathy Jee. Kathy Jee is a junior in the Magnet Program and is excited to be a part of the wonderful Silver Chips staff. When not in school, she enjoys playing basketball and obsessing over "American Idol." She is looking forward to another stressful year of school... More »