Last night, the Blair Booster Club hosted the winter sports awards ceremony in the Blair auditorium. After a slide show commemorating the past season was displayed, baseball coach John MacDonald introduced the awards ceremony in place of Blair's athletic director, Dale Miller. Miller was in Pittsburg to attend a funeral.

MacDonald recognized the 78 scholar-athletes by having them stand up. The 31 athletes who earned straight A's for the second marking period received a special patch. 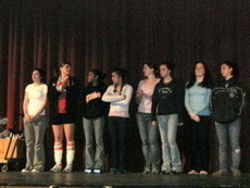 Every winter sport was represented at the awards ceremony by a coach who recapped the sport's season and highlighted particular athletes' performances onstage. Coaches selected athletes from their team to receive the Most Valuable Player (MVP), Outstanding Senior (OS), Most Improved (MI) and Coach's Award (CA) awards: