Four AP classes to be eliminated

Four Advanced Placement (AP) courses will be eliminated after the 2008-2009 school year, College Board announced in an e-mail to teachers last week. 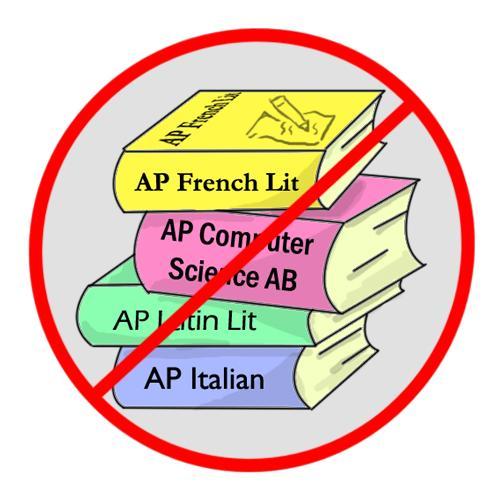 Of the four courses being cut, Blair currently offers classes in all except for Italian Language.

Latin teacher Wayne Miller is worried that removing one of the two AP Latin exams would limit the opportunities students have to study the language. "Every once in a while we get students who take AP Latin Literature or [AP] Latin Vergil in their junior year, so they'll take the other in their senior year," he said. "But now that the literature exam has been removed, what course do we give these students in their senior year?"

French teacher Arlette Loomis expressed disappointment with the future elimination of the AP French Literature exam and believes that College Board is taking away an exceptional course in the foreign languages. "The literature is the heart of any language," she said. "I have students I taught 20 years ago that remember literature and have never regretted taking it. It's a challenging course, but you end up having learned something meaningful."

Dvorsky believes that College Board picked the wrong AP computer science course to cut. "Although around 17,000 students take the Computer Science A exam and only 5,000 take the AB exam, we still think they killed the wrong course," she said. "Those of us that teach and grade the AB exam know that it covers a lot of college material."

The Magnet computer science classes will not be affected because they are not specifically designed to follow the AP curriculum, Dvorsky said. "The students will still have an AP test to take," she said."

In addition, Dvorsky said that College Board will revamp the AP Computer Science A course in the next five years to cover the material a first semester college class would. "We hope they will put more advanced topics and higher level material in the A exam," she said. "Then there won't be a lot we have to change."

All three teachers encourage students to e-mail College Board against the AP course cuts.