High school has most finalists in nation 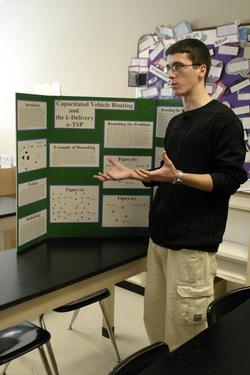 Four students from Blair's Magnet program were named as finalists on Jan. 26 in the 2005 Intel Science Talent Search (STS). This year, Blair had more finalists and semifinalists than any other school in the nation.

Seniors Abby Fraeman, Michael Forbes, Sherri Geng and Justin Kovac were among 40 students to advance to the final round of the Intel STS competition, the oldest science competition for high school seniors in America. The four seniors conducted projects on topics ranging from computer science to space science to medicine and health.

Glenda Torrence, Magnet senior research teacher, was ecstatic at the news. "There are no words to describe it," she said. "When we have four [finalists] out of 40, it says so much for the [Magnet] program. These four deserved everything they got. [They produced] excellent projects, extremely well-written and well-researched."

The STS is a program started by the Science Service in 1942. Applicants complete research projects on a variety of topics to compete for a total of $530,000 in college scholarship money; one student will be awarded the $100,000 grand prize. This year, around 1,600 students applied, 300 of whom were named semifinalists. Of these, 13 students were from Blair.

In the past four years, Blair has had no more than three finalists in one year. Since 2001, there have been 47 semifinalists from Blair and eight finalists. Two former Blair students, Gordon Su and Anatoly Preygel, made it to the top ten finalists in 2004 and 2003 respectively.

Fraeman believes the rigor of the math-science program has helped Blair students to consistently do well in the competition. "The Magnet has been encouraging research since ninth grade," she said.

Forbes agrees that the Magnet program has encouraged him to both conduct a research project and enter Intel. "I have to thank Dr. Torrence," said Forbes. "[She] exposed us to this opportunity and guided us through the process."

The Intel projects were the result of years of hard work and exhaustive research. Applicants had to fill out extensive applications just to be considered for the contest. Geng, whose project focused on using an automated algorithm to detect seizures, worked on her project for two summers. "The Intel contest is basically measuring your potential as a scientist," she said.

Forbes' project dealt with vehicle routing and how to design a delivery route that would optimize performance in a situation where supply does not equal demand. Fraeman's space science project focused on the theory that a large planet exists in proximity to a bright star that vaporizes comets, and she ran computer simulations to explore this theory. Kovac, who recently moved to Florida and could not be reached for comment, studied the effects of warm water pools on traveling cyclones.

The four Blair finalists have had their share of accolades for their hard work. They have been mentioned in The Washington Post and were the subject of a Fox News interview, which was pre-recorded at Blair on Jan. 27. The interview was aired that night on Fox 5 News at 5 p.m.

The final round of the competition will occur from March 10 through March 16 in Washington, D.C., where all the finalists will attend a black-tie dinner after showcasing their projects to judges as well as to the general public. "The hardest part is over," said Geng. "I hope the project speaks for itself." Winners of the competition will be announced March 15.

In the meantime, Forbes will focus on perfecting his presentation and looks forward to an "in-depth look at other people's projects" while at the event in March.

Torrence said she would be proud of her students no matter the outcome of the final round. "After you've gotten to this level of achievement, everything else is just icing on the cake," she said.