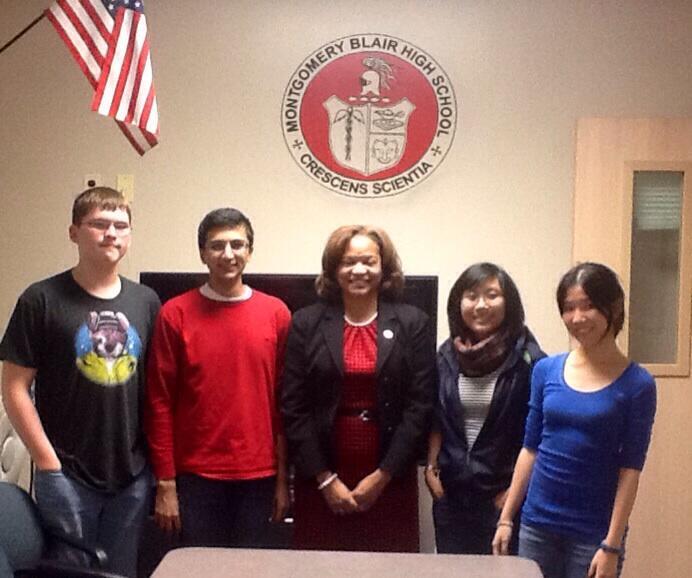 The four Blazers are all novices in the competition except Davey who placed third as a national finalist, last year.

The competition was founded by the Siemens Foundation, which provides $7 million every year to STEM educational initiatives in schools. The competitors conduct original research on a STEM topic of their choice and compile it into a paper which they enter to the competition. Students who qualify for the finals are awarded up to $100,000 in scholarships.

The students researched various fields. Chao used theoretical computer science to solve a problem in job scheduling. She did research to find already existing algorithms and then modified them to create her own which, she explained, worked well. "I tested how well my algorithm would approximate the optimal solution to the job scheduling problem," she said.

Davey developed a screening platform for the detection and treatment of prostate cancer for his project. "I incapacitated single cells, through that, we were able to diagnose low levels of prostate cancer cells from the blood," he said.

Martin investigated how to form biochemical molecules in meteorites without the use of enzymes. "I modeled the environment of meteorites, wet with very little oxygen and we let them stew and react then I analyzed what formed," he said. Shi submitted a project titled, "The Speeds of Families of Intersection Graphs."

The students have been working on their submissions since spring of last year. They explained that their research has been a 10 week process, but their preparations for the project started earlier. "I began looking over old research papers on my topic in March of last year, and I started completing my own research and writing in the beginning of the summer," Chao said.

Blair Magnet students are urged to find research internships in the summer, but are not required to enter the competition. As part of the program, they complete a STEM summer internship involving research and write research papers on their project. The Blair semifinalists, all four magnet students, used the project for both purposes. "We already had to do a project over the summer for the Magnet, so we did the research and we got a paper out of it to turn in to the Magnet and the competition," Martin said.

The four students worked with mentors who tracked their progress along the way. "Our mentors taught us how to do basic stuff and gave us ideas," Davey said. They worked with their mentors in labs at various institutions. Chao's was Dr. Khuller of the University of Maryland's department of computer science, Davey interned at Harvard Engineering School, Martin's was Dr. Cody of the Carnegie Institute of Washington geophysical lab, and Shi worked with Francisco Unda, a graduate student from Massachusetts Institute of Technology's mathematics department.

They all agreed that it was an honor to be named semifinalists of the competition. "It's basically the judges saying that your project is very impressive," Martin said.

The competition enables students to get a feel of what it is like to work in a real lab environment. Davey explained that he was in an environment where everything was not just handed to him. "You gain a sense of independence. It's not like school; you have to figure out things for yourself," he said.

Blair's semifinalists said that they will continue their research. "We can improve on what we've done and add more data," Chao said. They plan on submitting their same projects to the Intel Science Talent Search, another prestigious research competition, in November.