Students are often told that high school is like college, that it is the last stepping stone before college, but it's not. Students who are almost legal adults have little real freedom in high school, and this should change. Students deserve a more liberal arts-style curriculum, one that can give students some educational freedom.

Outside of school, 16-year-olds are given many responsibilities such as driving, holding jobs and sometimes even providing for their families. But in high school students are still treated as children who must be supervised at all times. Although there is talk of the "real world," it is treated as mythical and other. 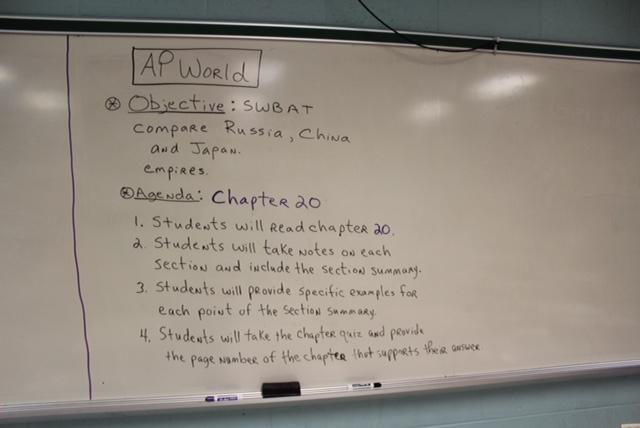 In college, just one year after high school, everything changes. Students can choose their own classes, they can eat whenever they want, attendance isn't mandatory and grades are based off of only a few tests and papers instead of worksheets. Students are treated like adults. Students are given responsibilities.

More and more, people are complaining that high school is not preparing students for adulthood because being kept in a building for seven hours every day, following instructions, is not how the "real world" works.

If high school were to be more like college, to provide students with more independence, teenagers could build the skills that they need as adults in the workforce - skills like budgeting time, multitasking and prioritizing.

Using this curriculum, students would have the ability to study what they wanted in order to further improve their skills in whatever area they want to pursue after high school. If students were unsure, they could use their high school time to figure it out so that when they went to college they would already have a better idea of what they wanted to do.

Right now at Blair there are specific required classes that all students must pass to graduate. All students must have three social studies credits and they must be U.S History, US Government and Modern World History. English also has a four-year requirement and for science there are at least three classes mandatory for graduation. Students are also required to take High School Assessments (HSAs) and Partnership for Assessment of Readiness for College and Careers (PARCC) tests.

With a liberal arts curriculum no specific class would be required, just a class that fits each of the subject requirement. Following the liberal arts style, the rest of a student's classes could be chosen by the student depending on what he or she wanted to study. There would be a requirement for math, science, English and social studies but students could choose what kind of class they wanted take under those categories. Instead of government, students could take a political science class.

This curriculum could benefit students who are not continuing their academic career after high school. For people who aren't going to college, their last four years are important and if they can use those years to learn a trade or area of study, they could excel in the workforce without the traditional college degree.

If high schools adopted a more liberal arts college approach to teaching students would be able to focus on what they wanted to , they'd be able to suggest courses they found interesting, this could increase attendance levels and attention levels in classrooms. Many kids skip school or fail classes, not because they can't do the work but because they're not interested or inspired. By giving them control of their education, letting them choose, they could be inspired.

For some students all this freedom would be quite a culture shock coming straight out of middle school. Most students would not be used to making their own choices about what they study, but with the help of counselors and parents, students could follow their passions. Some parents would be concerned about the curriculum. The one that students have now has been made by experts who know what students need to know before leaving school and without it students would not learn the basic things they need to know. The new curriculum would still have core values they would just be less confining so that students could discover what they like for themselves.

High school, instead of restricting students to a set curriculum, should give students the opportunity to explore while their education is free. They can discover their interests before they get to college, they can develop skills for adulthood and they can have the responsibility to choose - and go to the bathroom without permission being required.

This idea has never been tried. No one has ever brought higher education to public school but education is about trying new things when old ones don't work. With this new education system educators could change the way students learn into a more creative and diverse community. If adults take the first step and show students that there is more than one way to learn then the students can take the next step and pursue whatever they're impassioned to learn.