As the Friday evening sun settles below the horizon and the glaring stadium lights snap on to illuminate 100 yards of cleanly marked turf, one thought runs through the mind of every person in the small Texas town: football. "Friday Night Lights," a new series based on the movie and book of the same name, captures the lifestyle that high school football is with the grit and realness that characterized the film while spinning the situation into an engaging drama. 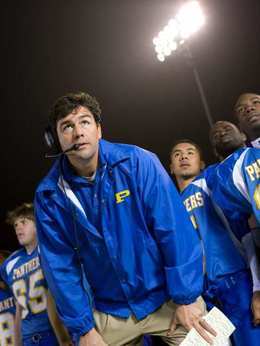 The show is set in the fictional town of Dillon, Texas and follows the Panthers as they prepare for another football season under the intense pressure and harsh glare of the football-frenzied community. Bolstered by extremely high expectations, the Panthers must persevere under the leadership of first-time head coach Eric Taylor (Kyle Chandler), who faces criticism and doubt from every direction.

The pilot episode pales in comparison to the potential that "Friday Night Lights" has. The episode is a like a mini version of the movie, mimicking the original's plot to the point of almost boring the viewer out of watching the rest of the show. It follows the Panthers through a week of preparations for their first game as they navigate through grueling practices, television interviews, and hints of high school drama. When game day arrives, the Panthers face a dismal situation as they fall behind to a weak opposing team. In the waning minutes of the game, star quarterback Jason Street (Scott Parker) makes a phenomenal tackle to prevent a decisive touchdown, but seriously injures his spine in the process. After an immobile Street is carried off the field, the Panthers rally behind backup quarterback Matt Saracen (Zach Gilford) and win the game.

What the pilot lacks in plot, "Friday Night Lights" makes up for with every other aspect of the show. Executive producer Peter Berg, who also directed the movie, is a powerhouse of unique technique and memorable quotes, bringing the show off the football field to explore the culture of Dillon's obsession with football. Berg employs a similar filming technique as the movie by using mostly handheld cameras. Although the rapid zooms and shaky shots that come as a result can become annoying, they bring the drama closer to the viewer, adding a sense of realism to the show. Berg also uses mellow guitar music in favor of the pulsing rock or hip hop that has become associated with sports dramas that effortlessly captures the solemn feeling that constantly runs through the town.

Berg, who also wrote the pilot, fills the episode with witty and memorable quotes that expose the deep hold football has on the community. In one scene, as the Panthers finish a football clinic with a team of elementary school kids and kneel down to pray, one player asks Street, "Do you think God loves football?" Street responds smiling, "I think that everyone loves football."

The strong dialogue also gives insight to the show's ensemble of high school characters, who are played believably by a fresh cast of young actors. When the Panthers are honored by the town at the opening of a new car dealership Brian "Smash" Williams (Gaius Charles), the team's cocky and electric running back, grabs the mike and spurts out to the crowd, "The Panthers gonna get diabolical, like Tom Cruise gets scientological."

Although on the surface the characters come across as stereotypical, the pilot episode makes a dent into the inner workings of many of them, foreshadowing the development of engaging characters in future episodes. Running back Tim Riggins (Taylor Kitsch) comes to practices drunk and has a nasty rivalry with Smash, hinting at a haunted side of the character. There is also Saracen, a soft-spoken player who suits up for every game and barely plays, before he is thrust onto the field on opening night. Finally, the show will have to explore the future of Street, who was heralded as the best quarterback in Texas before his life changing injury.

"Friday Night Lights" is authentic, a claim that not many show's in this year's fall lineup can truthfully make. Berg revives the passion and feeling from the original movie with clever wit and skill, promising an engaging look into the high school football culture in the weeks to come.