Blair students participate in climate activism both in and out of school.

Every Friday morning, junior Abby Kusmin dons a surgical mask as she sets up the silent strike table in the SAC. Kusmin is the founder of Blair's silent strike movement, the goal of which is to raise awareness of climate change and promote more action towards climate justice in school. "[Silent striking] is a super accessible form [of climate activism], and you can do it for however much of the day you're able to," she says.

The silent strikes began on Sept. 27, 2019, the last day of the Global Week for Future. The week kicked off on Sept. 20 with a mass strike. There was another strike on Sept. 27, but many students, like Kusmin, couldn't afford to miss another day of school. "There were other climate activists here who weren't able to skip school for a second time, so we wanted to have a way to take action in school," she says. Thus the silent strike movement was born, and has continued to take place on every Friday in school since then.

By Kusmin's estimates, there were originally 30 to 40 silent strikers each week, but now that number has dwindled due to a lack of regulars. Some students, however, take part in Friday climate action outside of school in addition to silent striking. 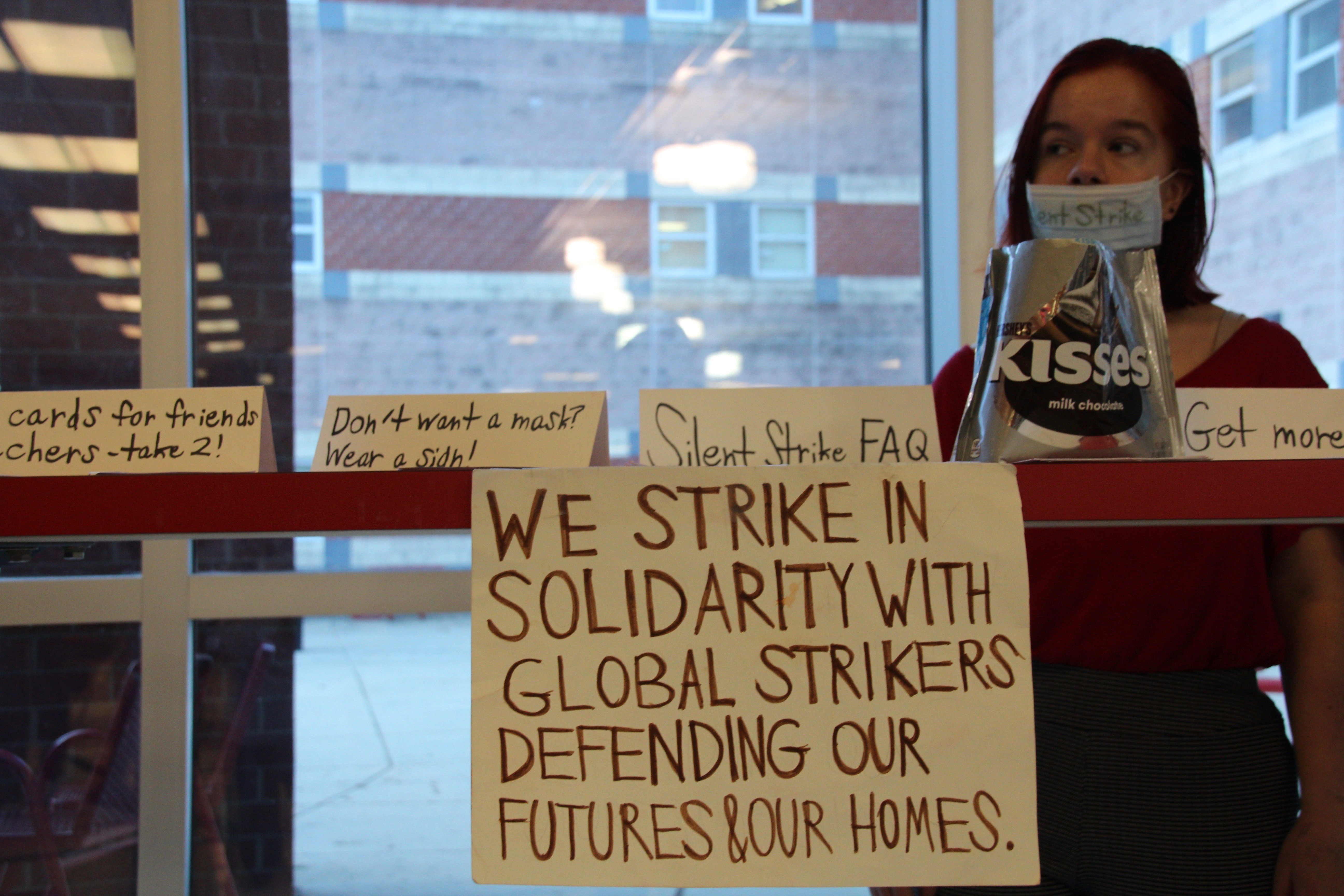 Photo: Every Friday morning, Kusmin sets up a table in the SAC with masks and signs for participants to take and wear throughout the day (courtesy of Audrey Haverland)

﻿Junior Maddie Graham goes on strike every Friday after school from 2-6 p.m. on Capitol Hill. Typically around 20 to 30 participants show up, but the turnout has been increasing, Graham notes. Kusmin and Blair junior Eva Allred also consistently attend the weekly strikes. Blair is one of the more active schools at these protests, along with Northwood and Blake. "In MoCo (Montgomery County), Blair is definitely the biggest school for Fridays for Future," Graham says.

Fridays for Future is an international movement, started by 17-year-old Greta Thunberg, a young climate activist in Sweden who began skipping school every Friday to protest the lack of action taken on climate change. "We have schools all around the world who are participating in a way that is appropriate for their region," Graham says. It is much more strike-based than Sunrise Movement, another climate action group for youth, of which Graham is a leader.

Sunrise Movement is mostly focusing on passing the Green New Deal, a bill proposed by House Representative Alexandria Ocasio-Cortez that is designed to fight climate change and economic inequality. "We lobby, we pressure elected officials, we organize, we canvas, we get people to vote," Graham says.

The next major worldwide event that they have planned is a strike on Earth Day. "The Earth Day strike is going to be the largest mass mobilization of people for climate action ever," Graham says. She and the other D.C. organizers have already begun planning for it.

Blair students have lots of options to get involved in climate activism, whether they are willing to make a large or small commitment to it. One aspect that stays the same no matter what form their activism takes is the feeling of empowerment that comes with demanding change. "It helps to see other activists that are able to get out there," Allred says. "Seeing people in person who are fighting for the same thing as you is very empowering."