From behind the scenes to in front of the lights

The night before Blair's 2001 spring musical, "Guys and Dolls," technical education teacher and stage crew sponsor John Kaluta decided to leave the Blair Players forever. Sitting down to write an instructional letter to the incoming stage crew sponsor, James Distler, Kaluta attempted to ensure that he wasn't abandoning his crew to dedicate more time to sailing. After typing the last period and printing the letter, Kaluta looked down at the 14 pages sprawled across his desk and decided then that he had to write a book. 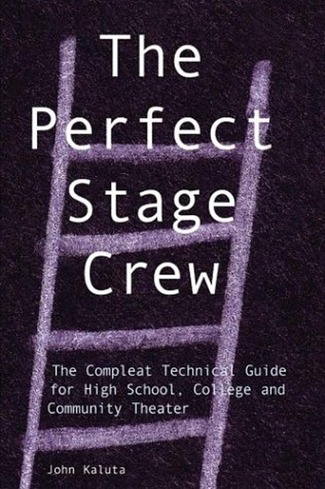 Kaluta has been working in theater for 33 years, 21 of which at Blair. After "Guys and Dolls" took its final bows, Kaluta took a hiatus from Blair stage crew to write his book about his experience in the business. "The Perfect Stage Crew": "The Complete Technical Guide for High School, College, and Community Theater" was published in 2003 and Kaluta returned to the Blair theater with an ambition to create a visual companion to the book. He produced a short television series - "The Perfect Stage Crew," - that, with the help of 10 Blair stage crew alumni, was aired on the Montgomery County Public Schools channel this September. The show was based on the team's experience building a set for a play called "Partners," directed by Paul Bogas and released in August 2004 at Baltimore's Fell's Point Corner Theater.

Kaluta spent months researching all aspects of theater production, from the high school auditorium to the professional stage. The final product was a 256-page guide to stage crew, edited by Allworth Press. After a two-year writing, editing and publishing process, Kaluta was ecstatic when he first saw his book on the shelves. "I walked into Borders and there was my book; it made my day, night and week," Kaluta says.

After years working behind the scenes, Kaluta was not used to attention when the book's success thrust him into the spotlight. Pace University added the all-inclusive technical stage crew guide to its required reading list for its lighting, stagecraft, development of the physical theater, scenic design, lighting design, and scene painting classes from 2003 to 2006. There are currently several thousand copies in print.

The detailed volume is an in-depth look at everything from hanging stage lights to selling tickets for productions. Kaluta juggles different aspects of how to successfully create a low-income production for a small theater in 40 days. He writes in a technical style, warning readers of the pitfalls that often overcome theater dramatization. "I wanted to fully explain how to comprehensively put together a show with limited resources," says Kaluta.

Before the curtain rose

Though theater has been a part of Kaluta's life since his first production in second grade, it was not until he joined the stage crew club in high school show that he experienced a production on the other side of the curtain.

After graduation he went on a leave of absence from stage crew but found that he yearned for the comfort of sawing wood, the extreme heat of spotlights and the searing sparks of welding. He returned to his hobby in 1982, making crew his profession at the Folger Theater doing odd jobs around the theater. "My friend introduced me to a professional stage crew. We worked together on a show, and from there I began my career," Kaluta reminisces.

After working in various theaters doing projects ranging from pyrotechnics to carpentry, Kaluta decided to switch professions. In 1986 he became a teacher at Blair. His new profession, however, led him back to his old passion when in 1990 during the fall production of "The Sting," Kaluta stepped in to cover for the Blair stage crew sponsor, John Randall, when Randall became ill. This short stint rekindled his love for stage crew and he took over the club when Randall retired.

Almost as soon as he typed the last letter of his book, readers and friends began wondering if he would create a visual narrative of the "Perfect Stage Crew" to accompany it. "I was talking out of my hat when I told my friend I was thinking about making a show, but looking back now it kind of makes sense," Kaluta says.

Kaluta's friend Bogas, a playwright and director, was producing a play called "Partners" in Baltimore. After sharing their ambitions and works in progress, Bogas and Kaluta decided to collaborate to produce a stage version of the show. Kaluta managed the technical aspects of the performance while Bogas produced and directed the play. In addition to building the set for the show, Kaluta used this opportunity to film his stage crew in action, getting footage for an upcoming episode he would produce.

Although the theatric performance was used as the backdrop for the televised show, "The Perfect Stage Crew," was based solely on the experiences of the crew. Kaluta instructed his team while teaching set-building techniques and skills in front of the camera.

At this point, Kaluta had been teaching at Blair for 21 years and decided that instead of hiring a professional crew for "Partners," he would recruit past and present members from Blair's high school stage crew for the job. "I knew them well; I knew they would get the job done. I picked them because they could easily explain everything they did without getting tongue-tied," says Kaluta.

Kaluta made phone calls and sent emails to gather the crew, which consisted of seven stage crew members who appeared on-camera demonstrating their individual expertise and three behind-the-scenes camera operators. The production of "Partners" provided this ensemble of recent graduates an experience in the world of television.

Before beginning, some of the crew believed the show was just going to be a replication of Kaluta's book; they soon found that this wasn't the case. The book and the show vary in their purpose and depth, the book attempts to explain the difficulties of putting together a performance while the show delves into the daily life of a stage crew member. "'The Perfect Stage Crew' TV show gives an accurate insight into the kind of work that we did and the kind of atmosphere that we created and worked in; it depicted the life of a stage crew worker," says Kevin Collins, a 2004 graduate of Blair and participant on the "Partners" crew, "Kaluta's book goes more in-depth about the technical aspects of shows, and is a better tool for teaching someone how to go about putting on a show."

A family crew through and through

Those who worked on the show for the two-week shoot found that the process became more than just a project with their former teacher. "Crews, in my experience, become a family of sorts and this experience, though brief, was no different," says Anuja Shah, a 2006 Blair graduate enlisted for "Partners".

Kaluta felt as though he was giving his recruits an experience to test themselves in a real-world situation where things could go wrong and the ultimate goal was not a grade. "It's like a good sports coach; you put in your hours and really dedicate your energy and efforts for the kids. You watch them improve and grow; that's essentially the role I played in stage crew," Kaluta says. However, Kaluta truly credits the students for their success, saying, "they did it all, I was the sponsor, but they did all the work."

Despite the bond the group shared, it did not help them escape the pitfalls of television production. Kaluta encountered many problems during his first television experience. "I realized I didn't have good quality audio. You'd think in television the visual aspect would be hard, but really it's capturing the perfect sound," Kaluta says. With 80 hours of raw footage and hundreds of hours logged using Final Cut Pro, Kaluta began to understand why more people did not jump into television production.

Kaluta says the largest hurdle was funding the show. "It is an enormously expensive proposition. I spent $580 in one day for a microphone that broke only weeks later," Kaluta says. The next biggest challenge was getting anyone to seriously view the final product. "I sent in the finalized section of 'The Perfect Stage Crew' to Maryland Public Television. I doubt if they ever looked at it because they immediately sent me back a rejection letter, albeit, it was as kind a letter as it could have been," Kaluta says.

Still waiting for the curtain-call

Even though Kaluta and his crew faced many problems and difficulties, they insist that their effort was well worth the time. "I think the [television] show itself fully accomplished what it was intended to, so that makes it a success in and of itself. The show does a great job of conveying standard methods for doing basic, necessary technical stuff – building flats, painting realistically, lighting effectively, all in a small 'box' theater," says Shah. Kaluta and Shah's sense of accomplishment was well-merited, as they helped Partners to win the 2004 Maryland Playwrights Festival award for Best Play.

Though he can't see himself repeating the process, Kaluta has not put "The Perfect Stage Crew" on the shelf just yet. "I made a promise to the crew and myself to see it through. I plan on finishing what I have started and making [the show] into a full-format DVD," Kaluta says.

Kaluta hopes either the Montgomery Public Channel will replay the show or his ultimate dream will come true, to have the show air on the Public Broadcasting Station. However, sitting around and waiting is not what Kaluta or his crew does. "If you want to take a lesson out of this, it is that you can try, don't just sit there," says Kaluta.