From blue and gold to black

In any sport, the job of the referee is to call out fouls and resolve disputes. But every so often the referee makes a bad call, and every so often it is not unintentional. Such is the situation in the case of People v. Eric Frimpong. In February 2007, Ghanaian soccer prodigy Eric Frimpong was accused by a white, female alcohol-intoxicated college student of raping her during a party. In March 2008, after a long trial based around meager evidence and biased testimony, Frimpong was unjustly sentenced to six years in prison. 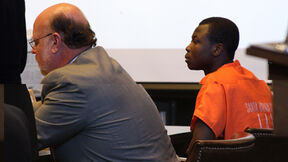 Photo: Eric Frimpong at his trial in 2008. Picture courtesy of the Daily Nexus.

Eric Frimpong at his trial in 2008. Picture courtesy of the Daily Nexus.

Frimpong was recruited from a poor farming community in Ghana in 2005 to play soccer for University of California, Santa Barbara (UCSB). By 2007 he had led the UCSB Gauchos to their first national championship and had been drafted to play Major League Soccer (MLS) for the Kansas City Wizards. The athlete with a 3.0 GPA and a clean record was therefore an unlikely character to commit the felony described by the accuser, known as Jane Doe, who on the night of the incident had not only just regained her driver's license after a juvenile DUI conviction, but also had a nearly lethal blood alcohol level. American society has eliminated many existing racial barriers, but this case exemplifies the prejudices that endure within the legal system.

Frimpong has a large band of supporters – teammates, classmates and friends – that will immediately attest to his immaculate and benevolent character. But in serious felony cases, of course, it is the physical evidence that pinpoints the most accurate scenario, and it is the physical evidence that is heavily weighed to make a just decision. At least, it is in most cases.

Though there were marks signifying sexual assault on Doe, forensic analysis revealed no evidence implicating Frimpong. And while test results showed an absolute absence of any of Frimpong's DNA on Doe or her clothing, they did show a match between semen found on Doe's underwear and her boyfriend, Benjamin Randall. However, the boyfriend, a white UCSB student, was never a suspect in the case; Frimpong was the lone suspect detectives singled out based off the description given by Doe the morning after the incident – while she was recovering from her high alcohol intake.

According to the U.S. Census Bureau, the city of Santa Barbara, California has a black population of 1.7 percent. And so, Frimpong's fate was in the hands of an all-white jury of nine women and three men. Tom Foley, a booster of the UCSB soccer team and close friend of Frimpong was quoted in an ESPN article saying, "I love this town, but there's no question there's racism here."

Doe's poor credibility mirrors that of the alleged rape victim in the 2006 Duke lacrosse case, in which a black stripper, escort and student at North Carolina Central University, falsely accused three white Duke University students - members of the Duke Blue Devils men's lacrosse team of raping her at a party held at the house of two of the team's captains. In this case, the players' lawyers also cited the victim's alcohol consumption the night of the incident and the several inconsistencies in her story. The questionable reliability of the accusers draws a strong parallel between the two cases. Yet Frimpong, a poor black immigrant, was found guilty, while the lacrosse players, each from an affluent white family, were all acquited.

The situation is reminiscent of other unfortunate cases within the past few years. These cases differ from the situation of the Duke lacrosse players in that racial prejudice played, sometimes quite blatantly, a defining factor. In 2006 when a brawl broke out between two equally disrespectful groups, one of white teenagers and one of black, in the Louisiana town of Jena, it was the latter group that was charged with attempted murder. The same year in Georgia, 17-year-old black high school football star Genarlow Wilson was sentenced to 10 years in prison for having consensual oral sex with a 15-year-old. Clearly racial biases are not extinct in the modern day legal system.

For Frimpong, who is currently a prisoner in the California Correctional Institution, hope remains with the recent filing of an appeal to the Second Appellate District of California Court. For the Jena Six teens, the charges were reduced and eventually ended with a plea bargain. The sentence on Wilson was deemed cruel and unusual and he was released after two years in prison. It is only right that Frimpong is given the retrial he deserves.

And while the entire case remains seemingly forsaken by the national media, Frimpong's supporters in Santa Barbara continue to spread the word about his experience and promote the eradication of prejudice in the judicial system. Because unless the referee upholds the rules, there can never be a fair game.