The primary lesson from a decade of involvement in Afghanistan: Don't leave yet

The little green signs that flutter on many a lawn around here seem to be multiplying weekly. Their simple message, however, reflects a much more complex reality half a world away. The signs that protest U.S. involvement in Afghanistan show a loss of hope in western efforts to rebuild democracy there.

But the reality of the war in Afghanistan, which entered its tenth year on Oct. 7, is that we're making faster and more lasting progress than before. At the same time, the country remains fragile enough to necessitate a continued American presence. 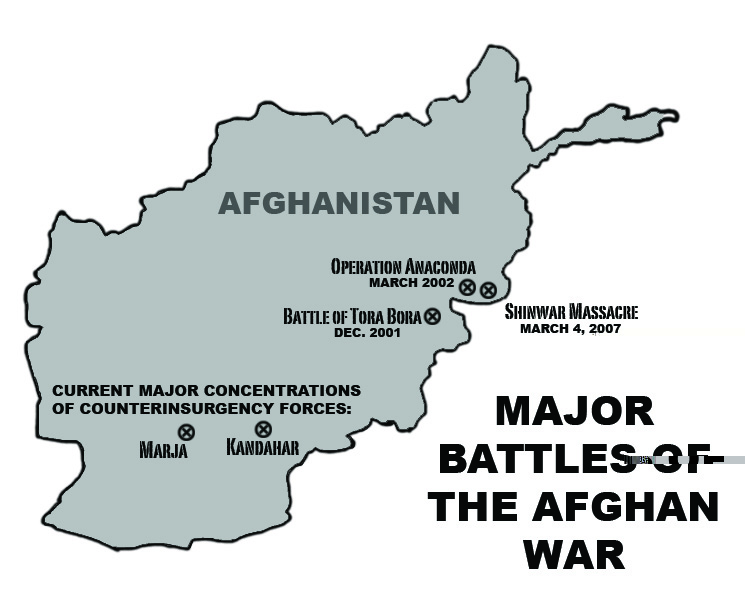 Photo:
Former president George W. Bush declared war in Afghanistan less than a month after the 9/11 terrorist attacks, but American resources and focus soon shifted away from the mountain nation, to Iraq. Though we toppled Saddam Hussein by 2003, the following years made clear that the real potential for mass destruction lay in the hands of al-Qaeda leaders in Afghan mountain hideouts.

So as our wildly unstable involvement in Iraq comes to an end, President Obama has stepped up efforts in our other Middle East battleground. A troop surge of 30,000 soldiers that began last September has offered promising results. The International Security Assistance Force, a coalition of counterinsurgency efforts led by the North Atlantic Treaty Organization, waged an offensive early this year in Marja that was successful in driving the Taliban out of a former stronghold.

Nonetheless, the conclusion remains the same: We need more time in Afghanistan to solidify and build upon our progress.

The most recent development is that Taliban leaders have warmed to the idea of formal peace talks with the Afghan government. The Taliban announcement was a major step toward the ideal end goal – a stable, peaceful Afghanistan and reduced threat to the rest of the world.

But the declaration came with terms: Although secret talks have already begun, the Taliban will not meet in full until the U.S. government sets timetables for the full withdrawal of its troops from Afghanistan.

The problem, of course, is that we can't leave in good conscience until we feel confident that a departure wouldn't cause a resurgence of insurgency.

And, unfortunately, conditions on the ground can't ensure that yet. Men may be leading this war, but its abandonment would likely have the greatest effect on women in Afghanistan.

As TIME Magazine suggested this summer, the Taliban restricted and repressed women severely during their period of dominance around the turn of the millennium.

The process of renewing their rights has been gradual, but slow reconstruction (25 percent of parliamentary seats are explicitly reserved for women under the country's 2004 constitution) has offered promise.

A weak, power-sharing government would jeopardize that progress, as would peace negotiations that forgo protecting minority rights in favor of compromise.

"It could potentially be very destabilizing if it does not leave in place adequate security measures for the government," said Ben Hopkins, assistant professor of history and international affairs at George Washington University, said of a U.S. withdrawal.

The other major impediment to withdrawal is the unbelievable level of corruption in the Afghan government.

Recent revelations – like document archive organization WikiLeaks' release of several thousands of documents related to the war, which published information that showed significant cracks in the U.S. presence and Afghan governance – have only confirmed what most experts have known all along.

Many key players in the governments of both Afghanistan and Pakistan are linked to underhanded deals with the Taliban and other insurgency fighters, and the slow pace of governmental reform is indicative of how constraining that corruption was.

If we are to believe that Afghanistan's government can manage its country, it needs to sever such ties and weed out crooked politicians from its ranks. Although U.S. forces can't explicitly intervene in corrupt governmental negotiations, of course, constant pressure to reform the political culture will make a difference. It's a slow process to reduce disregard for women's rights and transparent government, but reports have raised hope that the tenuous progress is becoming real.

Obama's judgment of just when it will be real enough should be the ultimate determinant of a timetable for withdrawal. The current date of July 2011 is likely too soon to ensure enough improvement – and it's subject to change.

"His ability or otherwise to stick with that is going to depend on the domestic political situation," said Hopkins. If setting a date is what the Taliban need to end their war, however, then Obama should carefully plan a tentative withdrawal.

If we turn down the flames on the war slowly enough, we'll allow enough time to judge changes in Afghanistan. Along with renewed peace talks between the Afghan government and Taliban fighters, that should provide the spark necessary to reignite a better future for the country.