From Paraguay, with love

Many teenagers cannot wait to get away from their invasive, nosy and ever-suspicious parents. Gabriela Formento, a Blair junior, is over 4,500 miles away from hers – but not to escape them.

Formento is an exchange student form Paraguay, a small country located in central South America, who came to America to learn. This year, she is staying with Blair sophomore Sibyl Brown and her parents. Since coming here, Formento has experienced several cultural differences between America and Paraguay: she has gone to football and baseball games, learned about the Civil War, spoken English and enjoyed every new challenge she is faced with – even though she misses her home.

Another life
Formento was born and raised in Asunción, the capital of Paraguay. "It's a big city, but in comparison to American cities it is small," she says of her hometown. Asuncion's population is just over a half million, according to the U.S. State Department. In comparison, Washington, D.C. has just under 600,000 people.

Formento says that Paraguay is a socially conservative country in contrast to the United States. After observing America, she is most shocked by the differences in social standards and behavior. "The girls, how they behave – everything here is more liberal," she says. 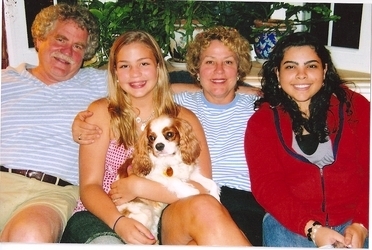 Formento is visiting the US with 28 other students from Paraguay. She came to America through the American Field Service (AFS), an organization that sends students and volunteers to foreign countries for educational and community-building purposes. AFS assigned her a host family and arranged transportation and coordination assistance.

Though Formento is with her fellow Paraguayans, she can't help but think of her family back home. She has left behind her two parents and younger brother, Daniel, 14. "I talk to them once a week," she says. Even though she misses her family, Formento is still enjoying her time in America.

Formento notices a few common activities between Paraguay and the US. Back home she plays volleyball, which she also plays at Blair, and tennis. She also likes to spend time with her friends. "When I'm bored, I go out with my friends and that's it," she says. "We go to the mall, watch movies – I'm always with my friends."

Though this is her first time in America, Formento has been to several other countries, including Mexico and the Bahamas. She enjoys traveling around South America and hopes to go to Australia or Egypt as an exchange student.

To the mall!
Blair sophomore Sibyl Brown is Formento's host sister. To teach her new friend more about America, the first thing Brown did was take Formento shopping. "She hadn't really been to American malls," Brown says. "We also got our nails done."

Formento noticed one big difference between American malls and Paraguayan shopping centers: the size. "It is similar, but in America malls are a lot bigger," she said. "Sibyl took me to the stores that most teenagers shop at – Aeropostale, Hollister and H & M."

Formento also shares parts of Paraguayan culture with Brown. "I told her about teenagers and how they behave," Formento says. "I showed her some music from Paraguay."

Brown likes having Formento stay with her. "It's just fun to have her around," she says. "Right now, she's more of a friend, but by the end of her stay, we'll be closer."

Another way the girls connect is through schoolwork. Though they are taking different classes at Blair, Formento sometimes recognizes Brown's algebra homework. "I am good at math," Formento points out.

The girls also bond over their different languages. While some exchange students have trouble communicating with their host families, Formento does not. "She has an amazing capacity for English," says Deidre Rye, Formento's host mother. "That's unusual for an exchange student."

But beyond exchanging stories and trying to communicate through different languages, the girls have found the perfect icebreaker in the boy who lived; J.K. Rowling's "Harry Potter" series has helped Formento bond with Brown. "We bought her the last book a few weeks ago and she hasn't been able to put it down," says Brown.

At Blair, she enjoys psychology and human development – but most of all, the freedom to choose her own classes. "In Paraguay, you can't choose your classes. Here, there is a different point of view," she says.

Both parents are supporters of exchange programs. "We'd be delighted if [Sibyl] wanted to go live in another country," Brown says. "The poorest quality of Americans is that we don't know much about other countries."

Rye and Brown appreciate Formento's presence, thinking of her as an educator. "She brings cultural differences that we don't share or do here," Rye says. "Her life is very different from ours."

Formento enjoys being an exchange student and educating Americans about her home country – the same value that her host parents share. "We can make true friends with other people," she says.

Not your football, American football!
While Formento enjoys being in America, she occasionally encounters something not to her liking – such as football games. "She thinks that football is a very violent sport," says Rye. On the other hand, Formento quickly became a Washington Nationals baseball fan. "She has a good judgment to like baseball," Brown notices.

Other than some new American sports, Blair's diversity is another adjustment for Formento, who attended a small, private, Christian high school in Asunción. "Blair is very different for her in terms of the diversity of the kids," Brown says.

Formento also acknowledges this adjustment. "It's a lot different. Sometimes it's harder," she admits.

With Halloween and Thanksgiving coming up, Formento will experience some uniquely American holidays. "They don't do Halloween in Paraguay," Brown says. "Not Thanksgiving either, of course."

So, in the coming weeks, Formento and her host family will be donning Halloween costumes, eating turkey and mashed potatoes and bridging the gap between two very different cultures. "I'm looking forward to dressing up in costumes," Formento says excitedly.