From the field to the classroom

Stepping up to the plate, the bat heavy in his hands, John MacDonald stares at the pitcher with fire in his eyes. He takes the first pitch for a strike but remains calm. The second comes and MacDonald pounces on it. With a mighty swing, he sends the ball out into the parking lot, his fellow teammates cheering him on as he runs around the bases. The year is 1978.

A former Blair athlete turned Blair teacher, MacDonald is part of a large group of high school athletes who did not pursue their sports beyond graduation. Only about six percent of all high school athletes play at the collegiate level and less than one percent play professionally, reported the National Collegiate Athletic Association (NCAA) in 2006. Out of those 99 percent that do not, about eight percent enter teaching or coaching at the high school or collegiate level. Blair boasts multiple former great athletes donning new attire as teachers. 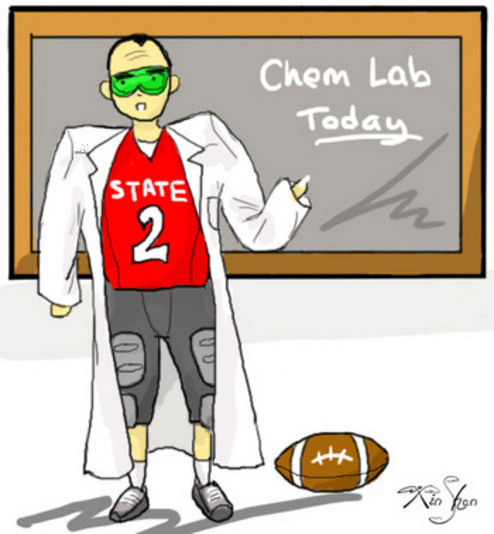 Photo: Blair teachers move from the sports field to the classroom.

Photo: Blair teachers move from the sports field to the classroom. Photo courtesy of Xin Shan.

Back in the good old days

MacDonald was a part of Blair's varsity baseball team from 1978-1980, playing third base exclusively. An All-County athlete for two years and All-Met during his senior year, MacDonald had a real knack for the game, even though the team finished 7-11.

Despite his personal accomplishments on the diamond, he remains modest in his performance. "Truth be told we weren't very good," MacDonald says of the team at the time. "I sometimes question how good I was as a baseball player. I always felt as though I was the best player on just about every team I ever played on, but I leave those judgments to those who played with me or against me."

MacDonald still holds the single-season batting average record for a Blair baseball player at .492, a feat he is very proud of. "I usually don't mention it unless someone else brings it up or asks me about it, but it is something I am proud of," he says. "I hope to one day coach the player who breaks that record."

A few years earlier, social studies teacher Kevin Moose was also causing a stir â€" but on the mat, not the diamond. From 1973-1975, Moose was a part of Blair's wrestling team. He was a two-time Montgomery County Wrestling Champion in 1974 and 1975 and placed third in the regional tournament both those years.

After a two-year break from the sport at Notre Dame University, Moose transferred to George Washington University and wrestled for two years there, performing outstandingly well. "I was a conference champion in 1979 (158 lbs) and finished 2nd in 1980 (167 lbs)," he says. "I am still close to many of my former coaches and teammates."

Ten years later, science teacher Angelique Bosse tore up the track at Woodward High School in Rockville, now Walter Johnson High School. Known for her skills in the 300-meter hurdles, high jump and two mile run, Bosse was on the cross-country team from 1982-1986 and was a part of the Maryland State Championship Team in 1985. On the side, Bosse also swam for Woodward's varsity team in the winter.

Bosse went to Boston College, a Division-I school in running and swimming, but decided not to run due to the higher level of skill. "I was good but not that good! I could have run as a walk-on but I didn't," Bosse remembers. "I ran socially with my friends instead."

Despite these great accomplishments, there came a time where athletics were not the most important thing to these champions anymore.

Straight out of high school, MacDonald was invited to two major league tryouts for the Cincinnati Reds and the Baltimore Orioles. He also attended a tryout for 18 major league teams held by the Major League Scouting Bureau at the request of some local scouts. "There was a time when I was young when I thought I could pursue baseball further," he says.

Unfortunately, after a long series of tryouts, MacDonald did not make the cut for any of the teams. "There were a lot of people of similar talents," he remembers. "It became evident to me that I wasn't in an elite class."

After graduating from college with a public relations and journalism degree, he coached Blair's junior varsity baseball team for eight years. "That made me consider teaching," MacDonald says. "It made sense to me." He returned to college, received a teaching degree and joined the Blair staff as a certified physical education and health teacher. MacDonald then returned to his high school passion, taking over for coaching the varsity baseball team.

Although Bosse hadn't planned on running beyond high school, she hadn't intended to teach, either. She earned a B.S. in Biology and a master's degree in Cell Physiology with the intention of becoming a doctor or researcher, but soon decided her passion lay in teaching.

"In college and graduate school I tutored student athletes at Boston College and George Washington University in math and science and I also had done a mini-internship teaching biology at a small private school," she says. "So I decided to give teaching a try and entered a masters program at the University of Maryland. I got my masters degree in education and completed student teaching in Montgomery County and I loved it."

Moose decided on teaching in a slightly different manner. He was an army officer from 1980-1982 and never wanted to pursue wrestling further. "There really isn't any professional wrestling in the true sense," he says. "The pro wrestling stuff that's on TV doesn't appeal to me at all. I think it's a joke."

After the two years in the army, Moose decided to pursue teaching. "Teaching seemed to be my natural interest, and I love all social studies topics," he says. "Teaching is a job where you have the chance, and are kind of forced, to be a lifelong learner."

Back to the future

Even as a teacher, MacDonald has no desire to give up baseball. Aside from being the varsity baseball coach, he has played on a summer and fall softball team, made of mostly Blair alums from the 1970s and 1980s, for the last 25 years, although he says this does not because of his love for the sport. "We have a lot of fun and still qualify for the play-offs every year, but we don't do as well as we used to mostly because we are older than our competition and when it comes to the play-off teams, that age shows up in power and speed," MacDonald says.

Moose kept his love for the sport alive by coaching wrestling for little kids from 1992-2000, but does not wrestle on his own. He also helped to coach Blair's wrestling team for a couple of years and hopes to start again soon. "With two small children now I currently do not coach, but I certainly see myself coaching again at some point in the future," he says.

Bosse still keeps running, even at a competitive level in the Montgomery County Road Runners Club (MCRRC). "I usually enter the cross-country or road race series and up until some health issues this year, I do very well in my age group," she says. "I peaked in my mid 30s. My times were much faster then than in high school." Bosse coached Blair's cross-country team for 12 years before stepping down this year.

Bosse also volunteers at MCRRC races and is currently a coach for Girls on the Run, a national organization that uses running to teach a healthy lifestyle and self-esteem to elementary school girls. In addition, Bosse has become a spectator to her daughter Anna, who is on Walter Johnson's varsity cross-country team. "She is much faster than I ever was," Bosse says smiling.

Despite their former accomplishments on the field, these athletes have moved on and look now to the present and their teaching careers. "In the grand scheme of things, [the past] is really not very important at all. What is most important is the present and the future. I'm a good teacher and I try to be a good coach," MacDonald says.