From the SAC to the steering wheel

How Blair has risen to the challenge of feeding the community.

When the bell rang at 11:00 a.m. on a normal school day, the lunchtime rush began. Students made their way to the Student Activity Center (SAC), forming long cafeteria lines as they waited to receive their food.

Now, however, students enjoy their lunch break from home. Some students make use of the MCPS meal distribution program and join a different line—one in the Blair parking lot.

COVID-19 and the school closures that followed have posed unique challenges for the Blair community, especially those that relied on the school for their meals. These students are hardly alone, as the Food and Environment Reporting Network finds that nationwide food insecurity has more than doubled during this pandemic. 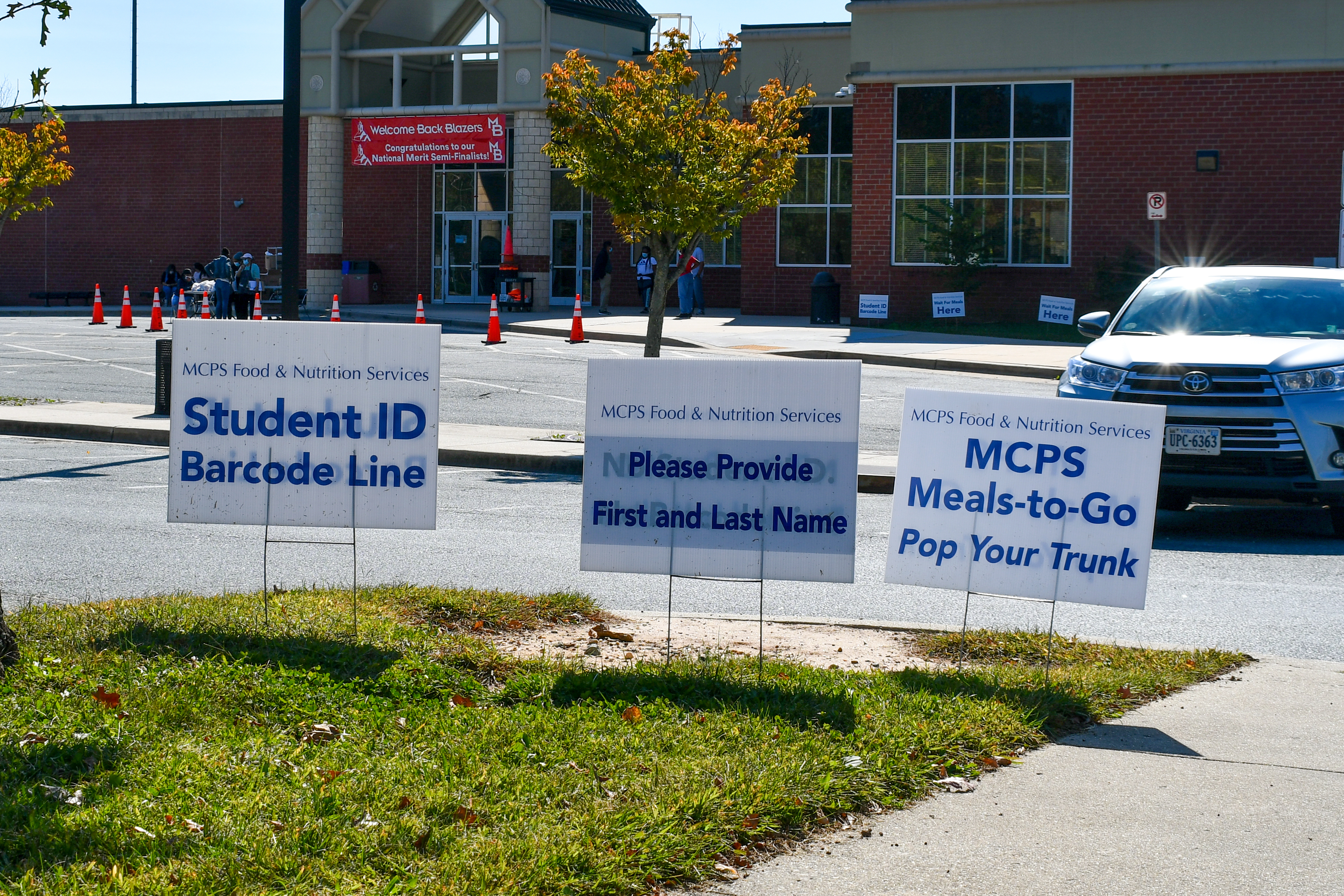 From the SAC to the steering wheel

MCPS has responded by implementing socially-distant meal distribution centers at 74 locations countywide, and Blair is one of them. This process began in mid-March and has continued since; by the beginning of August, MCPS had provided over 4 million bagged meals for free to students and children under 18, according to the Bethesda Beat.

Blair Cafeteria Manager Christine Blanton says that on the busiest days, she leads her staff in distributing over 3,100 meals. She knows her regulars, explaining that many people rely on the program. “That's a family that you know is in need of food,” she says, “[because] they don't miss a day. Rain or shine, they're here.”

Blair Principal Renay Johnson says that the endless line of cars during the weekend rush represents a positive asset to the community. “Just seeing the traffic, the line to get into the school to get the meals… I know it’s a good thing and I know we’re serving the community,” she says.

Johnson wants students to be able to prioritize their education without concern over basic necessities. “It shouldn't even be any stress. You should come to school, and we should be able to feed you breakfast, lunch, and dinner,” she explains. “You just focus on learning.”

Roxanna Yamashita, the CEO of Small Things Matter, explains that their efforts expand food accessibility beyond just students, as COVID-19 and corresponding economic challenges continue. “[The food we distribute] is supplemental to other people in the community that might not be able to access [school] meals,” she says.

While Johnson points to the MCPS program’s successes, Blanton feels there is room for improvement. Blanton is unsure whether the short lunch break, which is 75 minutes, is enough time for students to pick up lunch from the school, return home, and join their classes punctually. She also points out that some students do not have the means of picking up meals at all. “Not everybody can drive, not everybody has transportation,” she says.

Blanton thinks that MCPS should have school bus drivers deliver food to low-income communities. “You will get out more food that way,” she explains, “versus trying to have people come up here to get food because people still [need to] work; they're trying to hold on to whatever little bit of job that they have.”

Marla Caplon, the MCPS Director of Student Wellness Initiatives, agrees that having a system of delivering meals would further increase their accessibility: “My concern, you know, has always been making sure that folks get food, but what about those folks that can't come out?”

Farzaneh Nabavian, Blair’s Parent Community Coordinator, explains that the families making use of these services are grateful for the program despite its imperfections. The efforts to help those in need during the pandemic have changed the lives of all involved, Nabavian says. She believes this meal program should remain in effect even after schools return to in-person learning.

Though Nabavian thinks preserving food distribution services is paramount, the future is uncertain. Johnson explains that free meals are only guaranteed for the community until the end of the calendar year. “I think we have to see what the budget is,” she says. “We'll see what's allocated from the federal government for school lunches and school meals.”

Even if MCPS schools reopen and meals become easily accessible to students again, Johnson agrees with Nabavian that the program should remain in place. “[Free meal distribution] is a great service for the community, so I hope it continues through the school year,” she says. “Hopefully school leaders, as well as government officials will realize [that] just because kids go back to school, families may still be unemployed.”

For now, Johnson says that these long lines at Blair show the extent of the community’s need—which will likely persist for a long time. “When there’s no line, then we’ll know it’s okay.”