Principal Phillip Gainous announced yesterday that this may be his last year at Blair, pending a final decision by the Board of Education. He told the staff at a closed meeting Monday after school that he is being considered for the newly created position of Liaison for Leadership Development in the county. 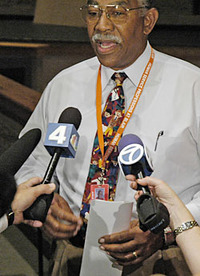 Photo: Pending a May 8 decision, Principal Phillip Gainous may end his 23-year stay/tenure at Blair. Here, Gainous is interviewed during the ID controversy on October 18, 2006.

Photo: Pending a May 8 decision, Principal Phillip Gainous may end his 23-year stay/tenure at Blair. Here, Gainous is interviewed during the ID controversy on October 18, 2006.

In an interview with Silver Chips, Gainous expressed ambivalence about the new position. "I never ever thought I would leave Blair, except when I retire," he said.

Gainous said that he sent in a letter of interest several weeks ago, and that an interview panel on the Executive Board of the Montgomery County Association of Administrative and Supervision Personnel (MCAASP) recommended him to school administrators and principals in the county. Gainous now awaits their approval. Principals and school administrators will be notified across the county of his pending position today. The school board will issue its final decision May 8.

While the responsibilities of the job have not been defined, Gainous would work with the representatives of the MCAASP, the Montgomery County Association of Administrative and Supervision Personnel and the Service Employees International Union. "It would involve teaching administrators what the programs are about, and how to implement them," he said.

His possible departure would mark the end of his 23-year tenure as Blair's principal. According to English Paraeducator Janice Taylor, who was on the original selection committee that chose Gainous over 20 years ago, Gainous came in at a crucial stage for Blair. "At that time, it was just critical to get someone that would understand [all of] the Blair community...he came across that way for all of the programs," Taylor said. Gainous, who had served as principal of Prince William County's Gar-Field High School, was selected for his experience with large schools, "a lot of principles" and what Taylor described as a commitment to remain at Blair for an extended period of time.

Gainous said that after accepting the position, he began his work as Blair's principal with the intention of reforming Blair's image. He said that the school was viewed throughout the county as a "downtrodden hellhole that needed to be cleaned up." Gainous said that, instead, he found that the only crucial step was to find teachers who would interact with the students. "People were afraid to come here because of [Blair's] reputation...It was like going to war," he said.

Gainous also served as principal in the 1990s when both the school and the community became very involved in the effort to relocate Blair from what is now Silver Spring International Middle School to its current location on University Boulevard.

Gainous also took a serious interest in the development of ESOL programs and, more recently, the institution of academies. Gainous said that the next step for the administration will be to continue promoting academies throughout Blair so that students are better prepared for life after high school.

The prospect of concluding his Blair tenure has weighed heavily on him, Gainous said. "Ever since I sent in the letter of interest, I haven't slept well," he said. "I have been trying to get my mind wrapped around not being here."