New principal should maintain successful precedent set by past leadership

Community Superintendent Heath Morrison organized meetings with students, teachers and parents in which attendants were able to identify the qualities they desire in Blair's new principal. On May 22, students completed surveys identifying the most important characteristics of a principal at Blair. The Board of Education will form a panel of principals, students, teachers and parents to make the final decision. That panel should take Blair's defining characteristics and difficulties into consideration and how Gainous successfully dealt with them for 23 years. 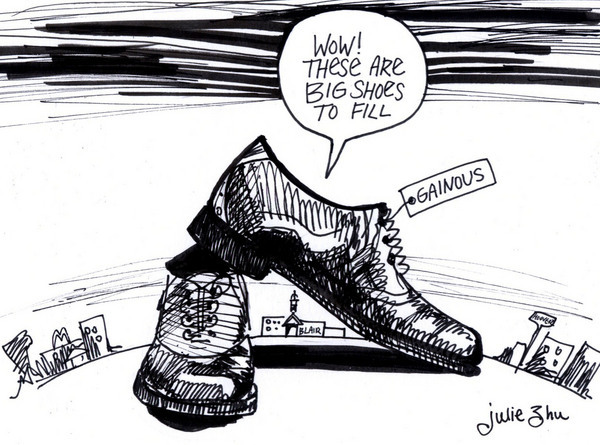 For a high school principal, Blair presents a number of unique challenges. Blair has the largest enrollment of any high school in Montgomery County. Between 2001 and 2005 Blair was consistently 500 to 700 students over the school's enrollment capacity of 2,800, hundreds of students were left without lockers in 2001, Blair's bathrooms were under-equipped with toilet paper in 2002 and overcrowding in classrooms and hallways led to pandemic student-lateness and controversial counter-policies in 2006. Recently, Blair's burgeoning population has caused morning congestion in the student parking lot.

Principal Gainous has consistently addressed Blair's overcrowding problem. In 2001 Gainous spoke out against what he saw as racist tendencies of neighboring school clusters, which he believed were contributing to Blair's population difficulties. In 2004 Gainous demanded additional resources from MCPS for Blair's custodial staff when Blair began hosting an additional 750 night school students. Blair's new principal must consider Blair's population problems when making administrative decisions and be as vocal and as unafraid of conflict with higher officials as Gainous has been.

Blair also has a diverse student body, with nearly equal proportions of blacks, whites, Hispanics and Asians. Students also come from varied socio-economic backgrounds – since 2001, around 20 percent of Blazers have been eligible for a free or reduced lunch price, considered indicative of a student's economic status. Such diversity prevents an administrator from being able to implement indiscriminate blanket policies and every decision must be scrutinized to determine its effect on all of Blair's students.

During his tenure, Gainous has handled Blair's diversity admirably. In 1985, Gainous encouraged minority participation in non-athletic extracurricular activities by organizing an activity fair. In 1990, Gainous defended a number of ESOL teachers who were accused of violating testing procedures during the Maryland State Writing Test, saying that ESOL teachers have special obligations to their students. In 1999, Gainous allowed Muslim male students to wear kufis, traditional caps, in school. To ensure that all students at Blair have an equal opportunity to succeed, Blair's new principal must be considerate of students' varied backgrounds.

The next principal must be prepared to contend with Blair's increasingly vocal students and balance student freedom of expression with necessary administrative oversight. During his 23-year tenure at Blair, Gainous has on numerous occasions both clashed and cooperated with Blair's Student Government Association (SGA), with Blair Network Communications (BNC), with Student for Global Responsibility (SGR) and with Silver Chips.

In 1999, Gainous supported BNC's initially controversial television program "Shades of Gray" and the Arlington, Virginia Freedom Forum gave Gainous the first "Courage in Student Journalism" award for his support. In 2003, Gainous and Blair's administration authorized an SGR organized student walk-out in protest of the 2003 invasion of Iraq. In 2007, Gainous and the administration consulted extensively with the SGA over the controversial new ID policy. In 2004, Gainous gave a student five-dollars worth of credit toward her financial obligations for catching him without his ID.

While determining who to appoint as the school's new principal, the Board's panel must keep in mind Gainous's excellent run as Blair's principal and refer to his many successes in dealing with the school's matchless challenges. In the days to come, the panel's greatest challenge will be finding someone to fill Gainous's cavernous shoes.

Iliya Smithka. Iliya Smithka will graduate from neither the CAP nor the Magnet Program. However, she somehow managed to get a decent education. While representing no particular program during her stint on Silver Chips Online, Iliya was a spectacular staff writer, although she never really mastered the ... More »

Gus Woods. William "Gus" Woods is a junior who enjoys, far more than anything else, tiddlywinks tournaments and "The Fresh Prince of Bel-Air" re-runs. He is a great fan of any and all music and enjoys playing the piano in his spare time. He belongs, literally belongs, ... More »