On Jan. 29, Bill and Melinda Gates announced that their foundation will provide $10 billion to research, develop and distribute vaccines to impoverished nations in Africa and Southeast Asia. Let me repeat that colossal figure, just in case your eyes didn't register it on the first read: $10 billion. This unprecedented charitable contribution is an inspiring commitment to improving global health that could prove to be the salvation of entire developing populations devastated by malaria, polio and the measles. 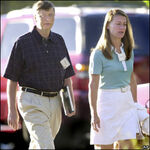 Photo: Bill and Melinda Gates announced Friday that their foundation will donate $10 billion towards developing and distributing vaccines in poor countries.

Photo: Bill and Melinda Gates announced Friday that their foundation will donate $10 billion towards developing and distributing vaccines in poor countries. Photo courtesy of BBC News.

Standing before the World Economic Forum membership on Friday at its annual meeting, Bill Gates promised to commit extensive resources to curbing child mortality rates in the world's poorest counties. Currently 80 percent of the world's children receive vaccinations for preventable childhood diseases. The Gates's generous infusion of capital to benefit the global vaccination initiative could increase coverage to 90 percent, which is expected to save 7.6 million lives among children under five years of age between 2010 and 2019.

In particular, both Gates professed a desire to mitigate the impact of diarrhea and pneumonia, the two leading global causes of child deaths. In a report published in The New England Journal of Science last Wednesday, researchers identified a rotavirus vaccine tested in South Africa and Malawi that reduced severe diarrhea caused by pneumonia by more than 60 percent.

The Gates's also identified malaria, which kills a child every 30 seconds, as one of the foundation's primary concerns. Bill Gates told BBC News on Tuesday that a vaccine in the last stages of testing could be developed in as little as three years with funds contributed by the foundation, which could save 1.1 million children by 2019.

The dedication to combating preventable childhood diseases and developing a cure for malaria will undoubtedly yield improvements in global health. Beyond the raw number of lives saved under this admirable program, the Gates' donation will elevate the flagging global standard for rich nations' investment in life-saving vaccines in developing countries.