Physical education teacher Robert McMahon and varsity lacrosse coaches Robert Gibb and Michael Horne are organizing after-school workout sessions on Tuesdays and Thursdays for all athletes who wish to play on a Blair sports team during the spring season. The sessions are held outside on the track at 3 p.m., weather permitting, or in the weights room and will lead up to the start of the spring sports season on March 1, according to McMahon and Gibb. 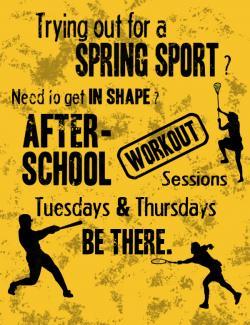 Photo:
Students who wish to participate must complete a physical form, and can contact Gibb or Horne to get these forms. Any student may participate regardless of whether or not they are eligible to play a sport in the spring, according to McMahon. The sessions focus on cardio conditioning - athletes do interval workouts, distance runs, shuttle runs and stretching.

Gibb's reason for opening the program to all athletes is based partly on legal requirements. "Per Maryland regulations, coaches are not allowed to work with players in their sports team on that sport before the season begins. However, they can do general training so long as it is voluntary and open to everyone," Gibb said.

He also believes that students train best in groups. "In a group, there tends to be some competition and [it] motivates kids to try harder," Gibb said.

Boys' tennis coach David Ngbea was particularly supportive of the idea. "This sounds like a really good idea and could really help our teams out," Ngbea said. "There is very little time to practice, our team especially. So there is no time to work on conditioning. This way, we can focus on skill building instead."