Most of us will never deal cocaine, shoot a gun or get shot at. Curtis "50 Cent" Jackson has done all of these things in director Jim Sheridan's mediocre "Get Rich or Die Tryin'," a loose biography of the rapper's life, that gives entertaining insight into the hustler lifestyle. 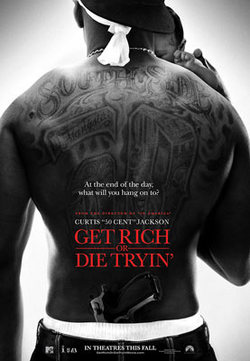 Photo:
Filled with sex, drugs and violence, "Get Rich" chronicles the life of Marcus (50 Cent) as he transforms from the son of a cocaine dealer to become a successful rapper. His mother's murder turns Marcus to the street life where he rises in rank within a group of coke dealers headed by the kingpin Levar (Bill Duke) and Marcus' closest boss, Majestic (Adewale Akinnuoye-Agbaje).

Following a stint in jail, Marcus leaves the drug trade behind and decides to pursue his dream of being a rapper with a smooth-talking, North Carolina man named 'Bama (Terrence Howard) as his manager. As Marcus becomes more and more successful as a rapper, violence and betrayal surrounds his camp, ultimately leading to a personal tragedy.

Jackson plays the gangster role well, but when the six-time Oscar-nominated Sheridan asks Jackson to show his inner feelings, the scene looks as if it's being performed by an amateur — which it is. His best moments are when he doesn't have to say anything too complicated or try to show his emotions. He just looks tough and imposing, like a gangster.

50 Cent's amateur acting is displayed when he is faced with the formidable task of showing his emotions without talking. While Marcus' jaw is wired shut while recovering from his tragedy, his girlfriend Charlene (Joy Bryant) has a heart-to-heart conversation with him. Marcus cries, shattering the thug rep Sheridan just built up and the real-life hustler image 50 Cent represents. He has a couple of hardcore lines that make him sound tough such as: "I'd rather die like a man than live like a coward." On the other hand, he also has a few silly lines that script writers stuff into the movie such as his revelation that he is dealing drugs: "I'm a gangster, grandpa, and I'm proud of it!"

The stellar performances from its secondary players save the movie from Jackson's amateur acting. Terrence Howard and Bill Duke light up the screen as 'Bama and Levar, respectively. Howard ("Hustle and Flow," "Crash") convincingly plays another character with a down-south drawl.

Another first-class performance is by Duke ("Exit Wounds," "Payback," "Predator") who expertly plays Levar, the kingpin of the cocaine-dealing ring. He dresses sharply, has a Bentley, carries a cane and talks in a raspy voice. The lines in his face show the stress that comes with making a living as a drug lord. His physical stature and his delivery of lines make him the perfect bad guy.

"Get Rich or Die Tryin'" is also somewhat confusing. After his growing up with an absent father and a dead mother, Marcus is determined to find her killer and his father. After going nearly his whole life without answering either of these questions, the answers to both are thrust in the audience's face after Marcus leaves the drug trade. Some subtlety and clarity would have improved this film.

Generally, this film had a well-developed plot but was held back by 50 Cent's amateur acting. The bottom line: 50 Cent and "Get Rich or Die Tryin'" tried hard but didn't strike gold.

"Get Rich or Die Tryin'" is rated R for obscenities, violence and sexual scenes and references.