The break afforded to the average student between class periods is a holy time of sorts. Grapevines grow exponentially as myths are swapped, bathrooms are hurriedly visited, stairs are ascended, descended and jumped over and a little bit of academic stress is let out before the next class begins. As of two weeks ago, Blazers had this little pie piece of freedom and pressure relief relegated to a mere three quarters of its former glory. Thinking upon this rather abrupt action, a responsible Blair student should consider the possibilities for other acts of shortening…before the bell rings that is. 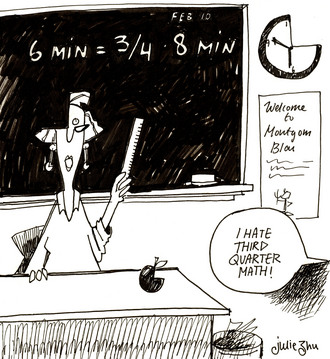 Photo:
Three quarters of an ID
Blazers will no longer have to don their plastic identification and gang activity prevention cards for the entire day. With the new policy, students wearing a piece of plastic "visibly above the waist" would be necessary only during three quarters of their classes. As an added bonus, the ID itself would only use up three quarters as much of the plastic as the current ID does, eliminating useless filler like bar codes and ID pictures, as well as cutting down on plastic waste in landfills.

The three quarters quarterback
The sweeping changes will leave no part of Blair untouched. Next fall, Blair football players will only be required to wear three quarters of the regulation padding and gear. While at first this may baffle people who have had experience with football, including players, coaches and emergency medical personal, once this new tactic is seen in action, the reasoning for such actions could not be clearer. The lack of a helmet increases side-view vision dramatically, making it easier to catch those tricky lateral passes. The stripping away of the shin and kneepads allows the once hulking linebackers to be as nimble as ballerinas and deftly outmaneuver their opponents. A winning season is finally within our grasp!

The play with no fourth act
In order to get more Blazers interested in literature and the art of theater, next year's fall and spring productions will only show the first three quarters of the play or musical. To tie in the required English and Art Department curriculum, the audience will be asked to write and act out the last acts by themselves, ensuring much joy and entertainment for all. You'll never look at Shakespeare the same way; reserve your tickets now!

Spicing up the Spirit Days
Since the administration does not want the SGA to be left out of the three quarters reformation, they have allowed them to sponsor "three quarters" Spirit Days. While this may seem like a puzzling concept at first, it is made simple by the straightforward interpretation that Blazers will only have to wear their Spirit Day clothes three quarters of the school day, and free range in their birthday suit the rest. No midriffs showing? Bah! Fingertip rule? Begone! While there may be some confusion and chaos at first, administrators and the SGA both agree that in the end the new Spirit Days will result in more attention being paid in the classroom. Start picking your outfit soon! Or not.

Yes, these could be some of the policies that come our way as the new administration gears up for more policy changes, rule augmentations and guideline enforcements. So be smart, citizen of Montgomery Blair High School. Prepare now. Take your time and think these issues through carefully. Or you can try to get to the restroom and then to your class on time. Your choice.