While students follow John Giles as he scribbles a complicated pre-calculus problem on the whiteboard, a sinister plot is being hatched across the room. He turns to explain what he has written when a "click" and "pop" resonate through the air and a small foam pellet hits him square in the chest. Giles has just been shot.

Unfazed, he shrugs and moves on. 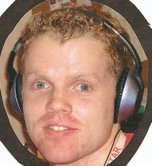 Photo: Giles rocks out in his math department board picture. Photo courtesy of Giles

Photo: Giles rocks out in his math department board picture. Photo courtesy of Giles

Giles' run in with an "armed" student is not an isolated incident; he has been stabbed with a plastic fork as well. Just when you might ask why, he says, "I'm insane." "I'm talking truly insane." Giles' quirky personality and lax approach to rules have attracted such odd behavior throughout his teaching career. "The only time I really get mad is when I can see that someone is really trying hard to understand something and a few other students are just rambling on about nothing," he says.

Giles is a Maryland native and has never lived anywhere else. "There is no state greater," he beams. Never thinking he would end up as a teacher, Giles enrolled in a business statistics class at the University of Maryland hoping to advance his business career. It was there that he fell in love with teaching - in particular - teaching math.

Giles had been taking the class for a few months when he noticed two of his friends were failing. He remembers thinking, "that's odd, how could they be failing, this class is so…easy." His solution: teach them himself.

Giles' began tutoring his friends and a few months later they both passed. "It really made me feel good about myself. I had helped my friends' create careers," he says. "Too bad only one graduated from Maryland."

After switching his major to education and completing his degree, Giles applied for a job with Blair's math department in 2003. "I was offered a job as a magnet teacher, but I really wanted to connect with the regular kids," says Giles. He is now in his fourth year of teaching at Blair.

He never realized how much work teaching was especially to someone with such a meticulous personality as his. "I make all my own homework from scratch, I hate the textbook", he explains. Giles is known for weaving characters and references from his favorite television shows into his already complicated word problems. Giles says he is obsessed with television humor. "I own every season of The Simpsons released thus far and have easily seen each episode eight million times," he says proudly.

Taking the time and effort to create student and teacher-friendly homework, Giles' work eats into his personal life. "I live in this stupid building. Last night I left here at 10 p.m.," he says. But, he does believe that the extra effort is worth it. "I enjoy when kids really figure something out, when that light goes off in their head, it's like I can almost see it," he says.

Although Giles adores teaching he disagrees with the 50 percent and retake policies implemented by the administration and how, "basic math skills are rapidly deteriorating." He has noticed how kids can't even multiply basic numbers. "They can't do anything without their calculators," he says. "Someone handed them one in elementary school and since then that's what they've been programmed to use."

But despite the downfalls of the system, Giles says he will always love teaching.