James Mogge to step down after three seasons 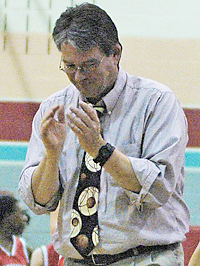 James Mogge, head coach of the varsity girls' basketball team, has resigned from his position after three seasons. Mogge's had a tumultuous tenure as head coach. He found moderate success in his first year, but the team struggled the last two, posting a 3-20 record and a first-round playoff exit this past season.

He had served for the past 12 years in some capacity as the coach of the JV boys' and girls' teams or assistant coach at the varsity level.

According to Mogge, stepping down was entirely his decision. "I had been thinking about it since last season," he said. "I didn't feel I was communicating effectively or achieving the goals I set for the program.

"The decision to resign is not an easy one, and it will probably be even harder when next season starts," said Mogge, "but I feel that it's the right thing to do."

The search for Mogge's successor is still in the preliminary stages, according to athletic director Dale Miller. "It's a process every school goes through," he said. The position will soon be advertised within the school and the county. Candidates from both inside and outside the Blair community will be considered, but an inside hire would be preferable, according to Miller.

"A qualified coach who is a teacher has first priority," he said. "You want to try to have a coach from within the school."

After screening and interviewing the candidates, Miller, administrator James Short and principal Phillip Gainous will have the final say in the decision. Adam Clay, coach of the JV girls' team, will serve as the interim head coach through the process of hiring Mogge's replacement.

According to Mogge, he will no longer be involved with the team, but is encouraged by the outlook. "We're young," he said. "We've got a strong nucleus of good young players."